Our office has represented many people accused of shoplifting, trespassing, public urination, public intoxication outside a store, theft crimes in parking lots and violent crimes in public places.  Often a security camera film captures the events.  Often the film provides our clients a defense or impeaches the claims written in a police report.

In 50 Words or Less:  Store security video evidence, without any in-person identification, can be used to convict you.  When showing the video, the prosecution needs to lay a proper foundation for what is shown by establishing that the video accurately represents a certain location at a certain time.

Larkins challenged the testimony of one witness whose testimony the prosecution offered under California Evidence Code § 1101(b) to show identity, intent and knowledge.  The witness was a 24 Hour Fitness loss prevention manager whose testimony identified Larkins at a Montclair 24 Hour Fitness.  The witness testified that he had never seen Larkins in person, but had seen twenty to thirty security videos with defendant in them and that based on such videos, he could also place Larkins in the Montclair gym on certain dates and times. 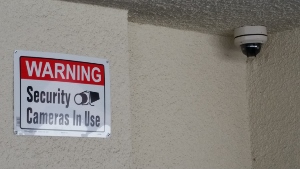 Larkins only seemed to insist that California law should impose a requirement that every witness seeking to identify a witness must have seen the subject in person prior to identifying him or her on video.  The implication was that without a person-to-person view, the identification of him was unreliable because it was speculative.

We do not doubt that a star-struck young lady who has seen
pictures of Justin Bieber in magazines could easily identify
him were she to see him on a video, on television or in person.

The court of appeal further noted that the loss prevention manager could observe Larkins’ distinguishing characteristics, such as his posture, gait and body movements.  In each video, Larkins was seen entering a certain club with a backpack over his shoulder, proceeding directly to the men’s locker room, emerging two to three minutes later and leaving the club, presumably with a more full backpack containing items stolen from inside the gym lockers.

For more information about shoplifting and vandalism, click on the following articles:
For case summaries of selected theft cases our firm has handled, click here.