When a defendant is convicted of vandalism, assault with a deadly weapon, criminal threats and perhaps even arson arising out of an alleged series of separate event motivated by hate against a protected group, how does the judge apply the hate crime enhancement?
When there are multiple counts arising from a series of distinguishable, separate crimes, the presumption is that the terms run consecutively (not concurrently).  The sentence calculation includes a principal term for the count with the greatest imposed sentence, including any enhancements specific to it.

About This Article Briefly: When a defendant faces multiple charges with hate crime enhancements on each charge, the terms run consecutive if separate offenses, but concurrently if one event.  The judge can sentence high, mid or low term on the enhancement (one-third of it on consecutive terms, however) for each charge, in his or her discretion, with certain exceptions. 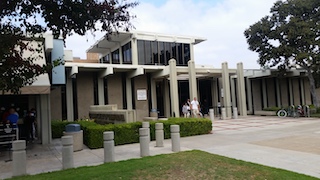 Westminster Courthouse
Second, when defendant is convicted of forcible sexual offenses for which the defendant is sentenced under the provision of Penal Code § 667.6 (which applies just to enumerated sex offenses), which permits the judge to impose full term sentences on multiple counts, to run consecutive.  If the defendant is sentenced to full-term consecutive terms under these provisions, the defendant “shall” receive full-term enhancements, not one-third as other mandated by 1170.1.  People v. Garza (2003) 107 Cal.App.4th 1081, 1093.
In the case of multiple counts for which concurrent sentences are imposed, the § 422.75(a) or (b) enhancements, if imposed, will be full-term.  A concurrent count is considered a subordinate term as defined in Penal Code § 1170.1(a), therefore, the one-third rule for enhancements does not apply.
For example, if defendant is convicted of two felony counts of burglary, Penal Code §§ 459-460, each with a Penal Code § 422.75(a) enhancement, the calculation would be for a consecutive sentence first considering the sentence for the principal term for the first 459/460.  The judge could sentence defendant to 2, 4, or 6 years for the burglary, plus 1, 2, or 3 years for the enhancement.  On the subordinate term, the second burglary count, the judge would be limited to one-third the mid-term of 4 years (one year and four months), but then could apply the upper, mid, or low term on the enhancement.  The aggregate sentence would then just be the sum of the principal term and the subordinate term.
If the judge or jury had found true the allegation that defendant had one prior felony hate crime conviction (Penal Code § 422.75(d)), the term of one year would be added not to each count but to the total term.
Lastly, when there are multiple victims, as one would expect, there are multiple applications of Penal Code § 422.75(a) or (b) enhancements.  The enhancement may be added to each count when the felony is an alleged hate crime.
For example, defendants are alleged to have assaulted three men.  Each defendant is charged with violation of Penal Code § 245(a) (assault by means of force likely to produce great bodily injury) and Penal Code § 243(d) (battery with serious bodily injury) against each of the three victims.  In addition, a hate crime sentence enhancement allegation of Penal Code § 422.75(b) is alleged for each of the six counts.
Each defendant would be possibly sentenced to 2, 3 or 4 years on the 245(a) count, plus 2, 3 or 4 years on the 422.75(b) count for the assault charge for the first victim.  As to the second victim, each defendant would face one third the middle term (three years) for the 243(b) count, or one year, plus one-third the mid-term on the 422.75(b) allegation, or one year.  As to the third victim, each defendant would similarly face one third the middle term (three years) for the 243(b) count, or one year, plus one-third the mid-term on the 422.75(b) allegation, or one year.
For more information about hate crime issues, please click on the following articles:
Contact us.
Serving Torrance, Long Beach, Compton, Airport Courthouses and Other Courthouses.