In 1973, when our client was just one year old, he came from Mexico to the United States with his parents for a better life.  He graduated from Bell High School in 1989 and since 1999, he had been working for a major employer in Maywood, rising to the position of heat-treating supervisor.  This job helped support himself, his girlfriend and her children.
However, before he got the long-term job in 1999, in 1997, he was high on cocaine at a West Covina bar with a bag of cocaine and was searched by a police officer, who found the bag and arrested our client for violation of Health and Safety Code § 11550 (using or being under the influence of a controlled substance), then a misdemeanor.
He went to court in West Covina and was granted PC 1000 diversion, but he then did not report to court for progress hearings, so the West Covina judge entered the conviction once our client was picked up and brought to court.  The judge then sentenced our client to six months in county jail, for which he served almost three months. 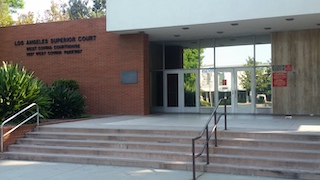 West Covina Courthouse
The judge did warn our client that such a conviction could cause our client to be deported, denied naturalization and/or denied re-entry to the United States, but our client thought the judge just recited the warning to everyone and it really did not apply to him.  In other words, He did subjectively appreciate that this might one day apply to him.
In 2008, the client then went to court and had the conviction expunged under Penal Code § 1203.4.
In 2019, at age 47, he decided he wanted to become a U.S. citizen, but his immigration attorney told him that his 22-year-old conviction for violation of Health and Safety Code § 11550 would be a problem, even though it was expunged.
The immigration attorney then referred the client to Greg Hill & Associates to discuss a motion to vacate a conviction under Penal Code § 1473.7, so the client called Greg Hill & Associates.
Greg explained how, effective January 1, 2017, Penal Code § 1473.7 provides that “[a] person no longer imprisoned or restrained may prosecute a motion to vacate a conviction” when “[t]he conviction is legally invalid due to a prejudicial error damaging the moving party’s ability to meaningfully understand, defend against, or knowingly accept the actual or potential adverse immigration consequences of a plea of guilty or nolo contendere.”  Penal Code § 1473.7(a)(1).
Here, that prejudicial error was in our client’s prior counsel never explaining to the client, in 1997, that a plea to a violation of Health & Safety Code § 11550 would impede the client’s citizenship application.
However, effective January 1, 2019, Assembly Bill 2837 modified Penal Code § 1473.7 to remove the requirement of establishing ineffective assistance of counsel (IAC) and the requirement that petitioner face a pending removal proceeding.  This made things easier for our client.
The client, nonetheless, was concerned if he could still request to vacate the conviction because the conviction had been expunged eleven years earlier.  Greg explained that the answer was yes, but rephrased the client’s question as really asking if Court had jurisdiction over such a request because the case was dismissed under § 1203.4.  Greg explained that the retained the power to act under 1473.7, as it can act under Penal Code § 17(b)(3) even after § 1203.4 relief (See Meyer v. Superior Court (1966) 247 Cal.App.2d 133) and can grant a certificate of rehabilitation after an eligible sex offense is dismissed under § 1203.4.
The client then hired Greg Hill & Associates to prepare, file and serve the Motion to Vacate a Conviction under Penal Code § 1473.7.  Greg used the judicial council form for the first page of the motion, but supplemented it with points and authorities that presented 1473.7’s history, including an discussion of Assembly Bill 2837’s effect and reassuring the judge that despite 1203.4 relief having been granted, it could still vacate the conviction under 1473.7.  The supplemental points and authorities included a declaration from our client explaining his personal situation in life and why good cause existed to grant the motion, although that really was not required under 1473.7.
The West Covina judge hearing the motion granted the motion to vacate, which our client was very happy with.  The prosecutor in West Covina then announced that the People were unable to proceed due to loss of evidence because of the passage of time.  This made our client’s citizenship application much stronger.
For more information about motions to vacate a conviction or plea, please click on the following articles:
Contact us.
Serving Torrance, Long Beach, Compton, Airport Courthouses and Other Courthouses.