Over the last six months, there have been a series of reported appellate court decisions addressing whether Mental Health Diversion, brought into law at Penal Code § 1001.36 on June 27, 2018, is retroactive.  The decisions are generally consistent is finding that § 1001.36 is retroactive to cases that have not reached a final judgement, but for those sentences and convictions that are final, mental health diversion is unavailable.

The Gist of this Article: The Fourth Appellate District agreed with a defendant sentenced to 38 years to life on an assault with a deadly weapon case that the case should be remanded for consideration of referring the case to Mental Health Diversion.

Mental Health Diversion is considered a pretrial diversion program, so it would seem that no one could seek this after a trial and jury verdict, but the following reported decision from the Fourth Appellate District, from a San Diego Superior Court case, says otherwise.
Brooks A. and his friend, David L., had dinner at a restaurant in Balboa Park in San Diego in May, 2017.  This was well before 1001.36 came into effect.
After dinner, while walking back to their car, they heard and saw two homeless males on the other side of the street “having a very loud conversation.”  Brooks A. and David L. continued walking to their car when all of a sudden, Brooks looked over his shoulder and saw one of the homeless men, Markeith Jenkins, aggressively approaching him.
Jenkins asked Brooks, “Why are you walking away from me?”  Brooks did not know the man, had never seen him before and had never spoken to him before.  The same was true for David, Brooks’ friend.  As Brooks turned around to say, “I’m sorry, I don’t know you,” Markeith Jenkins hit Brooks with his fist in his jaw / nose / cheek area.
The force of the blow “shattered” multiple teeth, “busted open” his lip and caused significant blood loss from his mouth and nose.  David called 911. 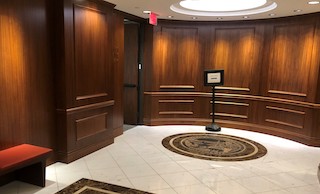 Fourth Appellate District Court of Appeal Division 1 San Diego
For weeks after the attack, Brooks could not eat solid food, had trouble breathing and swallowing and even months later, had facial swelling.
A jury convicted Markeith Jenkins of assault by means likely to produce great bodily injury (Penal Code § 245(a)(4)) and battery with serious bodily injury (Penal Code § 243(d)).  The jury also found true that Jenkins personally inflicted great bodily injury (Penal Code § 12022.7(a)).
As to additional sentence enhancements, he further admitted to having two prior strike convictions (Penal Code §§ 667(c) and (e)(2)(A)), two prior serious felony convictions (Penal Code §§ 667(a)(1) & 1192.7(c)) and two prior prison convictions (Penal Code § 667(b)).
However, before sentencing, he filed a “Romero Motion” (People v. Superior Court (Romero) (1996) 13 Cal.4th 497, asking the judge, for purposes of sentencing, to have one or more of his prior strikes set aside just for this case.  The judge, Melinda J. Lasater, denied this motion.
She then sentenced him to 25 years to life on the assault by means of force likely to produce great bodily injury conviction, stayed his sentence under Penal Code § 654 on the battery with serious bodily injury conviction and imposed three consecutive years on the great bodily injury enhancement (Penal Code § 12022.7(a), plus added ten more years for the two prior serious felony convictions, for a total sentence of 38 years to life.
Jenkins appealed to the Fourth Appellate District, arguing the judge abused her discretion is denying his Romero motion and alternatively arguing that he was eligible for mental health diversion and that the judge further abused her discretion in refusing to strike one or both of his prior serious felony convictions (under the new SB1393 effective January 1, 2019).
This article will just focus on Jenkins’ claim that his case should be remanded for consideration of mental health diversion.
On that issue, the Fourth Appellate District, in People v. Markeith Jenkins (2019 DJDAR 9124), agreed with Jenkins, finding that under In re Estrada (1965) 63 Cal.2d 740, the new statute did have an ameliorative effect on punishment, so it would apply retroactively (to this case because it was not a final judgement).
We bring this summary to the reader’s attention because it shows how a case that went all the way through trial and even to a jury verdict and then sentencing can still be remanded for consideration of mental health diversion as long as the sentence is not final.  Whether the judge will find Jenkins a suitable candidate for such diversion remains to be determined.
The citation for the Fourth Appellate District Court ruling discussed above is People v. Markeith Jenkins (4th App. Dist., 2019) 40 Cal.App.5th 30.
For more information about mental health diversion, please click on the following articles:
Contact us.