The California Supreme Court recently decided a case with facts that are common in medical marijuana possession for sales cases: someone legally obtains marijuana and is found with evidence that suggests sales.

Officers approached the car and smelled marijuana.  Thy asked him if he had been smoking marijuana.  Dowl said he had, but added that he had a medical marijuana certificate.  Offices asked if they could search the car and Dowl agreed.

A search revealed $21 in cash, a WD-40 can with a hidden compartment containing marijuana residue, over two ounces of marijuana divided into ten bags of three grams each and three bags with 6.5 grams each.  Dowl was also wearing a large belt buckle that said “CASH ONLY.”  There were no pay-owe sheets found. 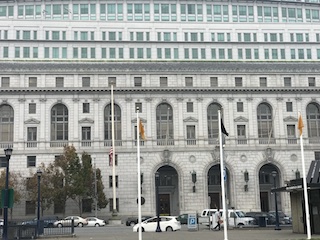 CA Supreme Court San Francisco
Police arrested Dowl and charged him with felony violations of Health and Safety Code §§ 11360 (a) (unlawful transportation of marijuana) and 11359 (unlawful possession of marijuana for purpose of sale).
The case proceeded to trial.  One of the arresting officers testified that in his expert opinion, Dowl possessed the marijuana for sale.  He based his opinion on the packaging of the marijuana and where it was found in the driver’s door compartment.  He also testified about the “CASH ONLY” belt buckle, there were no pay-owe sheets found (meaning only cash was accepted) and the fact that defendant had a prior record for sales of marijuana.  He also said that Dowl’s possession of a medical marijuana identification card did not affect his opinion.

Dowl’s defense was that he possessed the marijuana legally for purposes of medical treatment for a shoulder injury.  He said he separated the marijuana into small bags for his daily use.

The jury convicted Dowl and the Kern County judge hearing the case sentenced him to three years in state prison.

In Hunt, a conviction for possession of methedrine for sales was reversed.  One of the grounds was insufficient evidence that an officer’s opinion about the items found (quantity, packaging, normal use, i.e.) established sales of methedrine.  The court in Hunt, however, found this because methedrine is an uncommon illegal drug and the officer did not establish sufficient experience with seeing sales of methedrine.  The court even went so far as to say that in cases involving marijuana and heroin, an officer’s experience and observations about the items found is sufficient to establish sales, but not so for methedrine.

Turning to the facts of Dowl’s case, the Court of Appeal affirmed the conviction, finding that the testifying officer had sufficient experience to testify that Dowl possessed the marijuana for, or with intent to perform, sales.

Dowl then appealed to the California Supreme Court, but the Supreme Court affirmed the two lower courts, pointing out in addition that Dowl never objected to the qualifications of the testifying officer at trial.  This meant that Dowl failed to preserve this issue or ground for appeal.
The citation for the California Supreme Court ruling discussed above is People v. Lewis Marcus Dowl (2013) 57 Cal.4th 1079.
For more information about sales of controlled substances, click on the following articles:
Contact Greg Hill & Associates