Our client, age 18, was charged with one count of driving under the influence of alcohol (Vehicle Code section 23152(a)), a misdemeanor, and one count of driving while having a 0.08% or higher blood alcohol level (Vehicle Code section 23152(b)) after she passed out and ran her car into a parked car. At the time, she was returning home from a party. Both cars were totaled. Our client had a 0.16% blood alcohol content (BAC). The collision occurred in Manhattan Beach near Mira Costa High School. 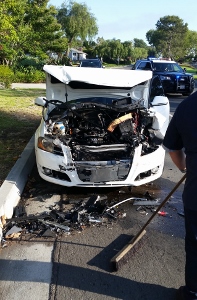 Scene of a Car Accident
Our client, a freshman at an elite East Coast university, was home on winter break. She had met up with friends. When police asked her if she had been drinking, she admitted to having one beer before the accident. She failed her field sobriety tests at the scene. It was quite obvious that she probably drank one beer several times before the accident.

Officers then administered the Preliminary Alcohol Screening (PAS) Test at the scene without first observing our client for fifteen minutes, which violated the PAS device manufacturer’s recommendations for use and is also a violation of California law for purposes of a DMV hearing (see Title 17, Section 1219.3 and People v. Sandra Molenda (2009) 172 Cal.App.4th 974).

Without All the Details, What Happened?:  Manhattan Beach, client under age 21, BAC of 0.16%, collision with parked car.

However, our client also provided a blood sample, which was obtained legally with her consent, so it was unlikely that proof of our client’s intoxication level could be ruled inadmissible.

“Damage control” and getting the best plea bargain for our client became the objective in this case once Greg Hill & Associates was retained. The case was filed in Torrance Superior Court. This was a major issue because our client’s parents were worried their daughter’s student loans might be cancelled due to a misdemeanor conviction. The client was also concerned how such a conviction and being on probation would affect her efforts to find a summer internship and later, a job upon graduation.

As the client was underage (under 21), had a BAC above 0.15% and was involved in a collision, the Torrance District Attorney’s first offer involved a nine-month alcohol awareness program (AB1353). To help with negotiations, Greg Hill encouraged the client to enroll herself in an alcohol awareness program back on the East Coast, following the curriculum of the Los Angeles County AB1353 program (the program curriculum varies by county within California), while the case was still progressing.

The client did so and also provided an extensive “Good Gal” packet, which Greg then provided to the prosecutor. The objective of the packet was to demonstrate the client’s high rehabilitation potential. This packet included the client’s high school diploma, her high school transcript, photocopies of her awards earned in high school, photographs of her participating in high school sports and letters of recommendation she used in being admitted to the great college she was attending.

After many court hearings and protracted negotiations, the District Attorney agreed to plea bargain terms which included attendance in the three month AB541 program, rather than the nine month AB1353 program that she would ordinarily be required to attend based on her BAC. The client was very satisfied with this concession from the DA, as she was able to complete the AB541 program in California over the summer before returning to the East Coast for school in the fall. This prevented disruption of her college classes, as it would have been very time consuming simply to drive back and forth to such classes in the city on the East Coast, especially if there was poor weather there.

Our client also was ordered to pay fines of $390, plus penalties and assessments, to attend a Mothers Against Drunk Driving (MADD) Victim Impact Panel (VIP) class, pay restitution to the owner of the parked car (our client’s auto insurance paid this), and be on 36 months of informal, or summary, probation.

For more information about a first-time DUI, being under 21 and a civil compromise to address property damage in a DUI-related car accident, click on the following articles: