Our client, age 25, was arrested as he stopped his car late at night in Manhattan Beach to relieve himself in an alley.  A Manhattan Beach police car noticed the car’s headlights still on while the car was parked, so he slowed to take a look to make sure all was well.

Summary:  Manhattan Beach, client ticketed for public urination late at night in an alley, charge of misdemeanor violation of Municipal Code 4.102.010, reduced to infraction for disturbing the peace (Penal Code § 415(2)).

The police officer slowed down and looked in our client’s direction just as our client was beginning to urinate.  The officer apparently noticed this and came got out of his car.

The officer walked toward our client briskly and ordered our client to stop urinating and to stand where he was.  The officer approached our client as if he was a felon committing a further felony and was concerned the client would run away, which would have been stupid with his car parked just feet away.

While the officer did not arrest our client, he was quite forceful with our client.  He immediately ordered our client to sit down on the curb so that the officer could be sure he would not run away.  After all, the client was not going to abandon his car to avoid a public urination ticket, which our client believed was just a $20 fine, like a parking ticket. 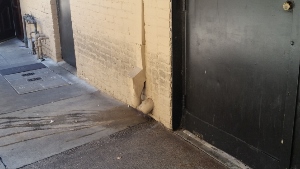 The client then took the ticket and jammed it in his glove box, never realizing he had to appear in the Torrance Superior Court and that he signed a promise to do so on a specific date.

The case was filed in 2007 in Torrance and our client failed to appear.  Consequently, a bench warrant was issued for his arrest.

In fact, our client then moved to Denver, Colorado and forgot about the case for almost four years.  One day in 2011, however, as he was applying for a new job, his potential employer advised him of the bench warrant for him for a misdemeanor out of the Torrance courthouse.

The client then called Greg Hill & Associates.  For a guy who forgot to appear for the ticket, his memory was extremely clear as to the details of his receiving the ticket.  Greg and the client discussed having the bench warrant set aside (also known as “quashed” or “lifted”) and then resolving the underlying case.

Our office appeared in the Torrance Superior Court a few days later, had the warrant lifted, plea bargained the misdemeanor down to an infraction and entered a plea.  The client was obligated to pay $10 fine, plus $133 in penalties and assessments and $350 in city of Manhattan Beach fees. Under the terms of the plea bargain, the prosecutor agreed to not oppose having the conviction for the infraction expunged immediately from his record, which the judge granted.  Our client then was hired for the Colorado job.

It merits mention that since this case was resolved in 2011, the law has changes on expungement of an infraction.  Now, one must wait a full year before asking a judge to expunge a conviction for an infraction.  The reader should also note that “expungement” of any conviction in California, whether for a felony, misdemeanor or an infraction, does not delete the conviction from the record or erase the charges from one’s record like it does in several other states. Instead, expungement changes the final plea in the case to “not guilty” and enters a dismissal of the case.  This can have big benefits in the employment context, as in this case.
For more information about the issues in this public urination case summary, click on the following articles:
Contact us.