Home
Other Information
Criminal Defense Articles
Registration as a Sex Offender Under PC 290?

Registration as a Sex Offender Under PC 290?

Our office has found a surprising number of criminal defense attorneys do not know which convictions require lifetime registration as a sex offender under Penal Code § 290(c) (or that for many, this obligation will change under Senate Bill 384 beginning in January 2021 and in July 2021, many registrants can petition for termination of the registration obligation).

This requirement can be the most important criteria in whether to accept a plea bargain, whether to proceed to trial or whether to even hire private counsel.
Consequently, it is crucial to understand what convictions require registration and whether a judge has discretion in ordering that the defendant so register.

In a Nutshell: The duty to register as a sex offender is a lifelong obligation for certain folks convicted of certain offenses, even after the law changes in 2021 under SB 384.

First of all, it must be appreciated that the lifetime requirement to register with local law enforcement applies only while the person lives in California, works in California or goes to school here in California. 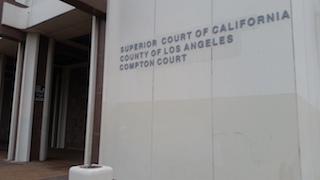 Compton Courthouse
The convictions which carry such a requirement are those that were entered after July 1, 1994 that involve:
Public urination and solicitation of prostitution (Penal Code § 647(b)) usually do not require registration as a sex offender unless the judge finds § 290.006 applies.  Our office has never seem a judge apply 290.006 to either offense.

It merits mention that merely being arrested for any of the above offense can involve one’s employer being notified by police if one works for a public or private school, regardless of whether one is a teacher.