Our client, age 40, attended an employer’s Christmas party in Manhattan Beach.  After the Christmas party wound down, he and a few other employees decided to keep the evening going by attending a few bars in downtown Manhattan Beach.
Our client was a U.S. Air Force veteran and left the service with a service-related disability rating of 30% for injuries to both his shoulders that left him unable to lift his arms as high as would a normal person.
Once in the downtown Manhattan Beach bar (Sharkeez), he had a drink with his friends.  The group began talking to a few girls there, who were friendly.  Our client asked for a second beer from the bartender, but the bartender refused to serve him anymore.  The bartender told our client that he was obviously too drunk and suggested he get some sleep.
Our client did not appreciate being told he was too drunk to have another beer or that he ought to go get some sleep.  He told the bartender as much and the bartender called the police, reporting a very drunk person in the bar.
As the bartender was making the call, our client was asked to leave the bar.  Our client refused, but then decided to just go next door for a while, but return to continue talking to the girls.
As our client was walking out, three Manhattan Beach police officers walked into the bar, looking for our client.  The bartender pointed our client out and the officers caught up to him. 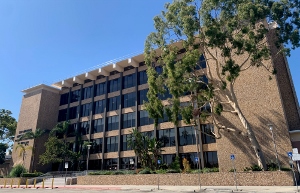 Torrance Courthouse
They asked our client to sit down on the curb and he refused, so the officer decided to grab his arms to get him to sit down.  Due to our client’s shoulder injuries, the officers could not move his arms to the positions they intended.  Our client tried explain the reason his arms were not bending as normal, but the police responded, “O.K., you want to resist arrest?  We’ll show you how we handle that!”  The police then forced our client onto the ground face down and applied a “hog-tie” to his arms and legs.
Our client was amazed at what had just happened so fast.  It seemed the police officers overreacted and just would not listen to him.  He was then lifted up, still tied, and placed in a police car.  He was then driven over to the Manhattan Beach Police Department building, where he was untied, booked and placed in a cell.
Our client was released about six hours later after signing a promise to appear in the Torrance Superior Court eight weeks in the future.  He was cited for violating Penal Code § 647(f), public intoxication, and Penal Code § 148(a)(1), resisting, delaying or obstructing a police officer.
Our client attended the arraignment on his own, eager to tell the judge what had happened and explain that he did nothing wrong.
However, at the arraignment, he was unable to speak to the judge and the District Attorney just told him to hire an attorney.  The District Attorney also was unwilling to listen to our client.  However, he told him the offer of a plea bargain: three years summary probation, 80 hours of community service, 52 meetings of Alcoholics Anonymous and a $350 fine, plus penalties and assessments.  The client was shocked.
So the Client called many attorneys, but finally hired Greg Hill & Associates.  Greg explained how the client’s status as a veteran may entitle him to military diversion under Penal Code § 1001.80, but that he needed to show his condition in the crime was related to a service-obtained disability.
Greg explained that the client should begin attending Alcoholics Anonymous (AA) meetings and go to the local VA and request classes for managing alcohol abuse and anger management.  Greg, himself a veteran of the U.S. Marine Corps, then explained how the particular judges in Torrance would most likely handle such a request for military diversion, based on Greg’s experience requesting this for other clients.
The client then did as Greg suggested and Greg appeared in court to request military diversion.  The judge looked at his treatment history with the VA and that the client had already attended 45 AA meetings (he had attended three per day for almost two weeks).
The judge placed our client on military diversion with an obligation to attend 52 AA meetings and continue with his treatment at the VA for one year.  If our client did this, the case would be dismissed.  The client was greatly relieved that he had retained Greg Hill & Associates to represent him in this case.
For more information about public intoxication, resisting arrest and military diversion, please click on the following articles:
Contact us.
Serving Torrance, Long Beach, Compton, Airport Courthouses and Other Courthouses.