In 2016, our client was stopped for allegedly speeding and crossing over the double-yellow center line along Valley Drive in Manhattan Beach.  He was later arrested for DUI when he gave a breath sample at the scene that measured at a 0.13% blood alcohol content (BAC).
The allegations of the police officer as to what he observed were contested through a hearing on a motion to suppress evidence, but the officer testified in court that his police report was incomplete and then he proceeded to testify in a way that neatly preserved the arrest and the case.

The Gist of This Summary:  Client suffered adverse employment consequences from DUI conviction due to his sensitive job within the defense industry.  Greg Hill & Associates therefore filed, served and appeared at a hearing for his petition for dismissal of the case (“expungement”), which was granted.

While this was frustrating because it seemed that the officer was not telling the truth in court, the Torrance prosecutor handling the case agreed to resolve the case for minimum terms.  He did not include a sixty-day county jail sentence although our client’s speed on a city street (more than 25 miles per hour above the posted limit) qualified him for such punishment.  This was understood as a way to soften the obviously false testimony of the officer.  Our client was therefore somewhat relieved to resolve the case on minimum DUI terms of 36 months of informal probation, a three-month DUI class, a $390 fine, plus penalties and assessments and payment of the Manhattan Beach booking fee. 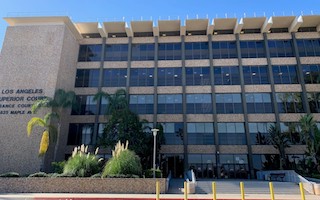 Torrance Courthouse
Three years later, in 2019, the client came to our office and requested expungement of the conviction.  He had moved back to the East Coast (Virginia) and was still working as an engineer with a Department of Defense subcontractor making radars for military aircraft.  He had a security clearance that was renewed annually and his DUI conviction was perceived as a problem, perhaps making him vulnerable to extortion from anyone seeking to gain his knowledge or access to the information he knew.  He had to answer extensive questions about the DUI facts to keep his clearance.  He was told that if he could have his conviction expunged, his security clearance would be easier to maintain.
The client therefore contacted Greg Hill & Associates to have his conviction expunged.  The client explained the difficulties he was having at work and how he felt his nineteen years of work with the same employer was about to end due to persistent worries by his employer that our client would lose his security clearance due to the DUI.  He had two sons and wife that did not work who relied upon his income to make ends meet.
Greg first completed the “full disclosure” issues that must be covered with anyone seeking to expunge a conviction must understand, as well as those specific to DUI and reckless driving.  First, when a judge grants a petition for dismissal (expungement), the order from the judge does not cause the record of the case being filed to disappear, delete or vanish from one’s criminal history.  Instead, the last plea is returned to not guilty and the case is dismissed.  Second, the major reason most people seek expungement is for the legal right gained that one can answer “no” to any employment question asking if one has been convicted of that crime.  The exceptions are if one is running for public office, seeking to operate a state lottery or applying for a license or a job with the government or its subcontractors, such as in our client’s case.
Moreover, with a DUI the judge does have discretion to deny the request for dismissal under Penal Code 1203.4(c)(1) and (c)(2).  Under these sections, a judge can deny expungement for anyone convicted of crimes listed under Vehicle Code § 12810, which lists DUI.  However, Greg stated that he has never seen a judge do this, ever.
The client stated that he understood what he was requesting and still wished to proceed.  Greg Hill & Associates therefore prepared the CR-180 judicial council form, attaching to it a supplemental memorandum of points and authorities with a declaration from the client explaining why he wanted relief.
The documents were then filed with the Torrance Superior Court and payment of the $120 filing fee was made.  The judge, at the hearing on the petition, granted the petition and signed the order of dismissal.
When Greg told the client about the judge’s ruling, he stated that he believed this ruling would preserve his job.
For more information about expungement, please click on the following articles:
Contact us.
Serving Torrance, Long Beach, Compton, Airport Courthouses and Other Courthouses.