Our client, age 22, went to Manhattan Beach with his girlfriend for a friend’s party.  The party started in the late afternoon and stretched into the evening hours.  The group was drinking various types of alcohol, smoking marijuana and taking a variety of other drugs. 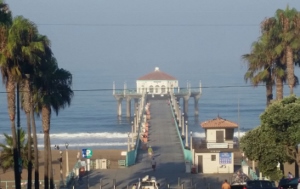 Manhattan Beach Pier
Our client’s girlfriend produced a tiny tablet that she told our client was LSD and our client took it.

He then wandered away from the group, in the dark, on the soft sand.  He started feeling uncomfortable with what the drug was doing to him, so he called his mom at home in North Hollywood.

Our client’s mom told him to come home ASAP, so he went to try to find his car.  However, he could not find it and after a few minutes of frantic searching, calling his mom repeatedly for reassurance, he decided to take a taxi home.  It was 1:00 a.m. and he was beginning to feel frantic.

He found a taxi and jumped in the backseat, instructing the cab driver to “take me home, to Mommy.”  The cab driver asked the client for an address and the client was unable to answer, as he had just moved to California from Florida.

Frustrated, he decided he would just drive the cab home.  He got out of the back seat and entered the front driver’s seat.  He tried to push the cab driver over to the front passenger seat, but the car (a Prius) had a center console that blocked the movement of the cab owner to the right.

Our client then tried to sit on top of the cab driver and tried to push the cab owner’s foot off the brake so he could drive home.  The cabbie resisted and our client exited the cab, only to be arrested by a police officer walking by.

Our client first obeyed the police officer and sat down on the curb, but when the officer attempted to place handcuffs on our client, our client moved away, asking “what are you doing that for?  I didn’t do anything!”

The officer then tacked our client and our client continued resisting, to the point where the officers were forced to put our client in a “hog tie” position to get the handcuffs on him.

The client had a prior grand theft conviction from Florida, so the first offer was four and a half years in state prison, based on half the sentence for carjacking (as it was an attempt only).  The client and his family were shocked and so they called Greg Hill & Associates.

Greg discussed the case with the family and recommended that the client begin attending at least two Narcotics Anonymous (NA) meetings per week and continue working (he was working two jobs at the time).  Greg commented that he thought he could certainly reduce the offer, as the crime was more attempted joyriding than carjacking because the client’s intent was only to take the cab to get home, not to steal the cab and keep it permanently.

The case proceeded through the preliminary hearing and onto superior court.  A trial date was assigned and plea negotiations went into an intense phase.

Greg prepared a Defense Position Letter with a mitigation packet and then had a personal meeting with the handling prosecutor and her supervisor.

In response, the prosecutor dropped the offer from four and half years in state prison to 180 days in county jail (which our client would serve a maximum of 90 days, as it was serious but not violent), plus six months in an outpatient drug treatment program.  If our client successfully completed the county jail and outpatient drug treatment program, he would be allowed to withdraw his plea to attempted carjacking and instead plead to a violation of Vehicle Code § 10851, which is a wobbler, and be placed on three years of formal probation.

If he successfully completes probation, he can ask the judge to reclassify his conviction as a misdemeanor and then have it expunged under Penal Code § 1203.4.