Over the last few months, there have been a series of appellate decisions which offer different rulings on the reach of Proposition 47.  Most of the conflicting decisions center on whether Prop 47 applies to certain theft offenses such as identity theft, use of a bank access card, joyriding, receiving a stolen car and commercial burglary.

Why This Article Matters: Prop 47 can apply to a felony violation of Vehicle Code § 10851 to reduce it under Penal Code § 490.2 if the value of the car is $950 or less.  This ruling was by the 6th Appellate District, which does not include Los Angeles County, so this ruling would not be controlling in LA County.

The Prop 47 petition for resentencing of Manuel Ignacio Ortiz, convicted of felony theft of a car under Penal Code § 10851, fell into this second category.

A short description of the factual background for the conviction is helpful.  In early November, 2012, the owners of a 1990 Honda Civic reported their twenty-two year old car had been stolen.  Fourteen days later, police found the car in San Jose with Mr. Ortiz driving it.  The front license plate was missing.  The rear license plate number did not match the license plate associated with the registration.  The car’s stereo was missing. 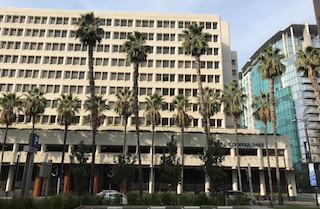 Court of Appeal Sixth Appellate District San Jose
Ortiz had a pair of pliers on the floor of the car and a shaved key in his pocket.  He said his friend lent him the car, but he could not give police his friend’s last name, phone number or address.  The owners of the car were contacted, who said they did not give Ortiz permission to take their car and did not know who he was.
The owners of the car had purchased it for $1,000 and sold it for $300 after recovering it.

After Ortiz was arrested, he was charged with violating Vehicle Code § 10851(a) as a felony (the charge is a wobbler, meaning it can be charged also as a misdemeanor), possession of burglary tools (Penal Code § 466), and driving on a suspended license (Vehicle Code § 14601(a)).  It was alleged that he had a prior conviction for violating § 10851, a prior conviction for a strike offense and had served two prior prison terms.

Ortiz pled guilty to all three counts and was sentenced to four years in state prison, which is a pretty low sentence given the sentencing enhancements.  He started serving his sentence in February, 2013.

In November, 2014, voters passed Proposition 47.  Ortiz learned of its provisions and petitioned for resentencing of his conviction for violating Vehicle Code § 10851.  If the trial court were to grant his petition and reclassify his conviction as a misdemeanor, he would most likely be released from prison due to having served the maximum time possible for a misdemeanor.

The Santa Clara County Superior Court trial court judge denied the petition on grounds that Vehicle Code § 10851 “is not one of the offenses that is affected by Prop 47 or Penal Code § 1170.18.”

It reasoned that 490.2 did apply to reclassify Vehicle Code § 10851 because 490.2 states, “Notwithstanding Section 487 or any other provision of law defining grand theft, obtaining any property by theft where the value of the money, labor, real or personal property taken does not exceed nine hundred fifty dollars ($950) shall be considered petty theft and shall be punished as a misdemeanor. . .”

The court then turned to Vehicle Code § 10851, which it noted could include taking a vehicle worth $950 or less.  It is a crime of theft, as described by People v Garza (2005) 35 Cal.4th 866, 971.  Consequently, it can be eligible under Prop 47, however, Ortiz did not show this in his original petition for resentencing.  Thus, the Sixth Appellate District affirmed the trial court, but without prejudice to allowing Ortiz to file an amended petition for resentencing.
The citation for the Sixth Appellate District Court ruling discussed above is People v. Manuel Ignacio Ortiz (6th App. Dist., 2016) 243 Cal.App.4th 854.
For more information about Prop 47, please click on the following articles:
Contact us.