Our client, age 44, was going through a bitter divorce and child custody battle.  He had two kids and worked long hours as a truck driver, while his ex-wife did not work.  She stayed at home and took care of the kids, now teenagers.  He asked her to return to work, but she refused.

About This Summary Briefly:  Client reaches into wife’s car to turn off the ignition and the wife closes the window on our client’s arm.  She then puts the car in reverse to drive away.  Our client pulls his stuck arm out, breaking the car window.  Case resolved for disturbing the peace and domestic violence terms.

The financial tension in the household led our client to occasionally drink more than he should.  He had no criminal record, but his drinking had led to quite a few heated arguments with his ex-wife, fortunately none leading to police intervention.

That ended one day when he was home early one day, drinking.  His ex-wife and kids came into the home and an argument ensued.  Our client’s ex-wife decided to leave the house with the kids, which made our client even more angry at her.

As she was pulling out of the driveway, our client went to his ex-wife’s car to ask her not to leave.  The children were in the back seat of the car.  Our client reached into the car through an open window to attempt to remove the keys from the car’s ignition.  As he was doing so, his ex-wife used the electric window button to raise the window on our client’s arm, while putting the car in reverse to leave.

Our client envisioned himself being dragged alongside the car, stuck to the car by the raised window, so he quickly pulled his arm back.  Unfortunately, while doing so, he broke the passenger side window.  His ex-wife then immediately called the police, characterizing the incident as vandalism.  According to our client, she told our client, “with a conviction for this, you won’t have any custody of the kids. I will get 100% custody and you’ll pay me out the maximum!”

Our client immediately paid for the broken window and had it replaced, however, the police arrested our client on charges of domestic violence (Penal Code § 273.5) and misdemeanor vandalism (Penal Code § 594(a)).

The client posted bail and then appeared at his arraignment himself, trusting that the public defender would speak with him and discuss his case.  While he was disappointed in this, he was happy that the Los Angeles City Attorney’s office prosecuting the case did not charge him with domestic violence.  Instead, he was charged only with vandalism.

However, the punishment for a conviction of vandalism includes a one year driver’s license suspension, which greatly worried our client.

When the public defender did not spend the time with the client as our client anticipated, he called Greg Hill & Associates.  He immediately spoke with Greg Hill, who explained that it was possible to have the whole case dismissed under Penal Code §§ 1377 and 1378 if the judge agreed that a civil compromise had been reached.

Greg then proceeded with the motion, luckily having the client’s ex-wife sign a declaration stating that she had been paid in full for the damaged window and that she was not opposed to any further prosecution of our client.

Greg then filed the motion, but the judge denied it, explaining that because the relationship between the ex-wife and our client fell under the Family Code defining parties to domestic violence, he was barred from granting the motion because there was “injury” to a victim of domestic violence (Penal Code § 1367(e)).

Greg vigorously disputed this characterization of the incident, as the ex-wife was not injured and there were no charges of domestic violence.  Moreover, the legislature used the word “injury,” not damage, meaning injury was required for § 1367(e) to apply, but there was no injury in this case.  In addition, our client pulled out his arm out of necessity, so the intent to vandalize was lacking.
The judge refused to consider this argument and abruptly told Greg, “your argument is rejected.  The motion is denied.  This is final.  Period.”

Greg then requested an opportunity to speak with the handling City Attorney handling the case.  Greg indicated he thought the judge had made a mistake in his ruling and that he would file a writ of mandamus to challenge the ruling. 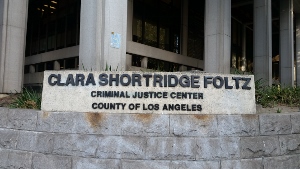 While not agreeing with Greg, the City Attorney proposed to reduce the charges to a disturbing the peace (Penal Code § 415(2) – making a loud noise) if our client agreed not to appeal, so our client would avoid the one year license suspension.  The terms of the proposed plea bargain included three years of summary probation, an obligation to attend 52 batterer’s program classes, pay a $500 fee to a victims of domestic violence fund and pay a $150 fine to the court, plus penalties and assessments.

Since our client was a truck driver and had no other way to earn money, he glumly agreed to the plea bargain offered, not happy, but relieved to be able to continue working and pleased that the family law court looking at the criminal action (our client pled no contest so the plea could not be used against him there) would understand it was a weak case.

For more information about vandalism and graffiti, please click on the following articles:
Contact us.
Serving Torrance, Long Beach, Compton, Airport Courthouses and Other Courthouses.