Convictions for Trespass and Vandalism for Juvenile Are Reversed

Penal Code § 602 (m) provides that a person commits trespass if he or she enters and occupies real property or a structure without the owner’s permission.  The term “occupy” means a non-transitory, continuous type of possession with a degree of permanency.

The Gist of this Article: Trespass requires the prosecution to show defendant occupied property in a non-transient manner with some degree of permanency, like a squatter on property owned by another, as the statute originally sought to forbid.

In late 2011, Y.R., a juvenile, was identified by her DNA as a suspect in an unsolved crime at a Vista condominium clubhouse.  Earlier in the year, someone had forced open the bathroom doors of the clubhouse.  The door jambs were broken and splintered wood was found on the ground nearby.  If one entered the bathroom at issue, the person had access to the rest of the clubhouse.

A detective from the San Diego County Sheriff’s Office asked Y.R. what she knew about the damaged doors at the clubhouse.  She told the detective that she and her boyfriend often went into the clubhouse to “hang out” because their parents would not allow them to be together at either of their homes. 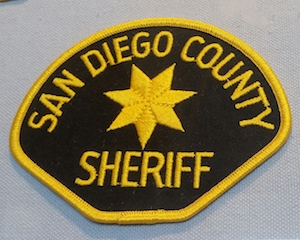 San Diego County Sheriffs Patch
On December 17, 2011, the two went to the clubhouse to “hang out.”  Usually, the doors were unlocked, but this evening, they were locked.  Y.R. was then talking on her cell phone when she heard a “crash” and saw that her boyfriend had broken the bathroom door open.  Y.R. said she did not know her boyfriend intended to break open the door.  The two then went into the clubhouse and hung out for one hour.  They then returned home.
The San Diego County District Attorney’s office then filed a petition under Welfare and Institutions Code § 602 against Y.R., alleging she committed felony vandalism (Penal Code § 594(a) and (b)(1)) and trespass (Penal Code § 602.5(a)).

The case went to trial and the judge found the allegation of trespass and vandalism true.

Y.R. appealed the convictions, alleging that the evidence was insufficient to support the convictions.  The law in this regard applies equally to adult court as to juvenile court proceedings (In re Ryan N. (2001) 92 Cal. App. 4th 1359, 1371).  The standard is that the reviewing court must review the evidence in the light most favorable to the judgment to determine whether it shows “reasonable and credible evidence of such value that a reasonable trier of fact could find the defendant guilty beyond a reasonable doubt.”  People v. Kraft (2000) 23 Cal. 4th 978, 1053.

Y.R. contended that there was insufficient evidence that she “occupied” the clubhouse on December 17, 2011.  The Fourth Appellate District, in People v. Y.R. (2014 DJDAR 7067), agreed.  It noted that when the legislature passed Assembly Bill 17-32 in 1945, which later became Penal Code 602, trespass, the law was intended to “stamp out” an “epidemic” of squatting caused by a post-World War II housing shortage.

In other words, the legislative history shows that it “intended the word ‘occupy’ to mean a non-transient, continuous type of possession with some degree of dispossession and permanency.” People v. Wilkinson (1967) 248 Cal. App. 2d Supp. 906, 910-911.  In Wilkinson, defendants’ convictions for trespass were overturned.  They had slept overnight on a very large ranch.  The court noted that sleeping on a three foot by seven foot patch of ground was not the type of conduct the Legislature intended to prevent when it used the words “occupy.”  Wilkinson, supra.

Turning to the facts of Y.R.’s case, the Fourth Appellate District found that Y.R.’s approximate stay of one hour did not constitute “occupying” for purposes of Penal Code § 602(m).

Regarding the vandalism charge, the appellate court noted that the prosecution had proceeded against Y.R. on a conspiracy theory.  The court then noted that a conviction for conspiracy requires proof that defendant and another person had the specific intent to agree or conspire to commit an offense.  Defendant is then liable for not only the target crime, but all crimes that are the natural and probable consequence of the target crime.

As such, the conviction was reversed.
The citation for the Fourth Appellate District Court ruling discussed above is In re Y.R. (4th App. Dist., 2014) 226 Cal.App.4th 1114.
For more information about common juvenile offenses, click on the following articles:
Contact Greg Hill & Associates
Serving Torrance, Long Beach, Compton, Airport Courthouses and Other Courthouses.