The Pine Avenue area of downtown Long Beach can be a raucous area at night on weekends, especially in the summers.  For our client, age 41 and out with colleagues while in town for a professional conference at the Long Beach Convention Center, it was a little too lively.  In fact, he received a souvenir to take home with him that he did not even want. 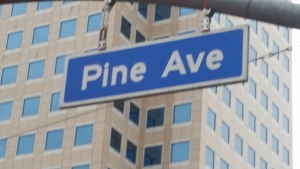 As he sat in a bar enjoying his last beer, with closing time just 30 minutes away, a fight broke out in the bar.  The bar staff hustled everyone out the door to make sure the fight did not spread to involve any more people.

Our client found himself standing on the sidewalk and unable to enter any of the other bars, which he needed to do because he urgently needed to use a restroom.  None of the bars along the street, however, allow people to enter within thirty minutes of closing time, especially when such folks were coming from a bar where there was a fight.  They could be hiding from police in another bar (exposing the bar management to criminal liability for being an accessory after the fact), start another fight or just impede the exodus of people out of the bar around closing time.

Police swarmed the area of the bar with the fight to ensure the fight participants were detained and witnesses interviewed.  At the same time, our client decided to relieve himself in a nearby alley, just as a police officer walked around the corner.

While the police officer was responding to a crime where there were possibly injured people, perhaps some with serious injuries, he could not pass up the opportunity to issue a ticket for urinating in public, which was surprising.  Apparently, this was more important to him at the time than possibly preventing a felony or helping give aid to someone who was injured.

What to Take Away:  Client ticketed for public urination, a misdemeanor, in the Pine Avenue area of downtown Long Beach.  Client hires Greg Hill & Associates.  Greg Hill goes to court and resolves misdemeanor case for an infraction (no probation) for disturbing the peace (PC § 415) and $25 fine.  Misdemeanor dismissed.

The officer opened up his ticket book and asked for our client’s driver’s license.  He then asked our client if he knew it was against the law to urinate in public.  Our client was drunk, but still aware enough to realize this officer was missing the more urgent need for law enforcement.  Nevertheless, our client was mindful of the respect officers must be given, so he obediently responded, surprised at the officer’s priorities.

Our client was issued a misdemeanor citation for violation of Penal Code section 372.  As he lived in another state and was unsure of how the case would proceed, he called our office.

While it is rare, a prosecutor can require one to register as a sex offender under Penal Code section 290 if one is convicted of urinating in public, especially if the fact really suggest more of an indecent exposure offense.  Were this to happen to our client, it would devastate him, as he had a successful career and a family with two young children.

Two weeks later, at the arraignment in court (the client remained at work out of state), Greg was pleased to find that our client was charged with an infraction for disturbing the peace (Penal Code section 415) and the plea bargain involved a mere $25 fine, plus penalties and assessments (bringing the total amount due to $224).

Our client was very happy to have the case resolved as an infraction, rather than a misdemeanor, as a misdemeanor would involve informal (or summary) probation, but an infraction would not.  Our client quickly paid the $224 and looked forward to expungement of it in a year.