Our client, age 24, had been out with friends in downtown Long Beach and was returning home to north Long Beach.  He had drunk a few beers while out with his friends, so by the time he returned to Long Beach, after a 15-minute drive, he had an urgent need to use the restroom.
He parked his car and, unable to hold it back any longer, decided to urinate just outside his home.  It was about 3:00 a.m.  A passing police officer, as luck would have it, observed our client urinating onto a fence and stopped his car just as our client was zipping up his pants and tucking his shirt.
The officer immediately got out of his car, as if preparing to chase our client if necessary.  The officer walked over to our client almost in a slow run.  Our client, in response, did not move a step, shocked at the officer’s speed in getting out of his car and quickness in approaching our client.
The officer asked our client if he knew urinating in public was illegal and our client responded “I’m sorry.  I just had to go.”  The officer then seemed to calm down as he said, “well, it is illegal.  May I please see your driver’s license.”  The client then produced his driver’s license for the police officer, as the officer began filling out a ticket on his ticket pad. 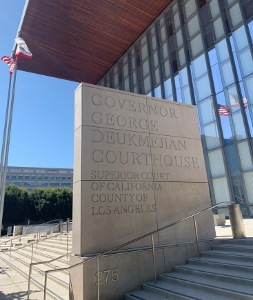 The client stated “I’m sorry” a few more times, but this did not seem to change the officer’s intention of writing the ticket for a violation of Long Beach Municipal Coe § 9.25.010 and giving it to our client.  Our client then signed a promise to appear in the Long Beach Superior Court about six weeks later.
The officer then told the client, “this is probably just a fine” as he circled the “M” on the ticket for misdemeanor, rather than “I” for infraction.  Such a comment by the officer may ultimately turn out to be correct, but it is incorrect when the officer marks “M” for misdemeanor.  A misdemeanor, by law, can only be resolved with punishment of county jail, county jail with a fine, county jail, a fine and informal (summary probation) or a fine and informal probation.  Such a ticket cannot be resolved as a misdemeanor for just a fine.
However, as our experience has shown, such offenses are often reduced to an infraction with just a fine and no probation.
The officer then left with the client holding a ticket, unsure what to do except retire for the night and tackle the ticket after a good night’s sleep.
Four weeks later, the client researched his ticket online and discovered that Long Beach Municipal Code § 9.25.010 is punishable as a misdemeanor with up to six months in county jail and a fine of up to $1,000, or both.  The client also read elsewhere on the Internet, in researching public urination, that one convicted of public urination can be required to register as a sex offender for life, which is incorrect.
The client panicked.  He had a good job working at Cal State Long Beach.  He feared a conviction for a misdemeanor, or even just being on probation, would mean he’d be asked to resign from work or that he would simply be fired.
The client then called Greg Hill & Associates and spoke with Greg Hill.  Greg listened to the client explain what had happened and what he was concerned about.  Greg also told the client that no, he would not have to register as a sex offender if convicted of public urination only.
Greg explained that the client’s case most likely would be handled by the Long Beach City Prosecutor’s office and that Greg expected the case to be referred to the P.A.T.H. program.  Greg explained that such a program, standing for “Promising Adults, Tomorrow’s Hope,” was a pre-filing diversion program wherein our client would earn a “no file” of the case by attending a six-hour class that was given on a Saturday at Goodwill Industries at 800 West P.C.H. in Long Beach.  Greg explained that such a program was championed by the Long Beach City Prosecutor’s office as a way for young adults, ages 18-24, to avoid a conviction and the stigma this involved in terms of employment discrimination later.
Greg explained that this was the type of case they Long Beach City Prosecutor’s office would accept because our client had no prior history, the incident was a low-level misdemeanor and our client met the age bracket the program was aimed for.
The client retained Greg Hill & Associates, who then wrote the Long Beach City Prosecutor’s office requesting that the matter be referred to the P.A.T.H. program.
About two weeks later, the client received a letter from the Long Beach City Prosecutor’s office advising the client that his matter had been referred to the P.A.T.H. program.
The client then shared this good news with Greg Hill, who then went with the client to the Long Beach City Prosecutor’s Office to help him sign up for P.A.T.H.
The client was very happy with this, as it worked out just as Greg predicted it would.  The client then did complete the P.A.T.H. program and no case was filed.  The record of the ticket was then ordered sealed and destroyed.
For more information about diversion programs, please click on the following articles:
Contact us.
Serving Torrance, Long Beach, Compton, Airport Courthouses and Other Courthouses.