Our client, age 40, and her husband, age 43, went out for dinner and drinks in downtown Long Beach on Pine Street.  The two could walk to the Pine Street from their home, so they felt comfortable drinking a few drinks because they would not need to drive home.
The two enjoyed their dinner and were walking back home when our client looked in her purse and realized that she had either lost her house key or forgotten to bring it.  She let her husband know this, while asking him if he had the house key.  He did not.
The two then discussed how they might get back into the home and our client sheepishly said she would call her brother, who lived nearby and who had an extra house key for our client’s home.
Our client and her husband then continued to argue about whose fault it was for not bringing the house key and how our client’s brother would notice the two had been drinking to excess and how he would gleefully report this to other family members. 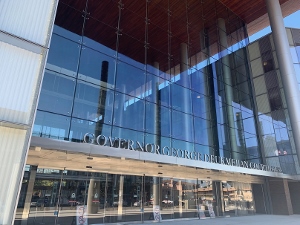 Long Beach Courthouse
Our client’s brother then came to the home and let the client and her husband into their home.  It was relatively early in the evening, perhaps only 10:00 p.m.  Instead of going to bed or retiring to watch television quietly, the two continued to argue.
At one point, our client reached over to her husband as if to put her hand across his mouth to quiet him down and stop the argument.  Our client’s husband immediately responded with “Now you’re hitting me in the face!”
At this moment, a Long Beach Police Officer knocked on the couple’s front door, apparently called to the location by a neighbor who overheard the loud arguing.  When the police first spoke to the couple, the two assured the police that everything was fine and that the two were just arguing and apologized for the noise.
However, police separated the two and asked the husband if our client had hit him.  He said she had pushed him in the mouth, which police interpreted as him claiming our client hit her in the mouth.
Police then promptly arrested our client and hauled her off to the Long Beach Police Station on suspicion of misdemeanor domestic violence, a violation of Penal Code § 243(e)(1).  Police never took a photograph of the mouth of our client’s husband or even confronted our client about the alleged hit by her to his mouth.  Instead, they separated the two and set bail at $20,000, which is the amount for 243(e)(1) predetermined by the Los Angeles County bail schedule.
Our client’s husband posted bail the next morning and our client was released to him with a promise to appear in the Long Beach Superior Court about two months later.
The couple then called several attorneys and met with three or four.  They ended up hiring Greg Hill & Associates.
Greg explained that the case would be handled by the Long Beach City Prosecutor’s office and that this office was attempting to divert minor misdemeanors to a pre-filing diversion program called P.A.T.H. (Promising Adults, Tomorrow’s Hope), which no other criminal defense attorney they met with knew about.  Greg explained that the program was generally focused on much younger folks than our client, age 40, and those that were not employed (our client worked as an executive with a marijuana marketing company).
Greg then wrote a letter to the Long Beach City Prosecutor’s Office demanding the police report the dispatch log, a recording of the 911 call, the officer’s body-cam videos and requesting that the case be considered for the P.A.T.H. program.  The letter acknowledged our client’s age as being above the normal range of ages considered for the program, but due to the minor nature of the case (at most disturbing the peace, really), this case would be a good fit.
The letter was mailed out and our office received no response for about two weeks.  However, at that time, the head Long Beach City Prosecutor, Doug Haubert, called Greg Hill by phone to advise that he had considered the police report on the case and, at this time, would not be filing the case.  Mr. Haubert further e-mailed Greg Hill with the same information in writing.
Mr. Haubert made it clear that the case was not a DA reject, but just that the case would not be filed on the day of the arraignment, pending further investigation of the facts.
Greg shared this information with the client, who was overjoyed and pleased that Greg had made such a suggestion to the Long Beach City Prosecutor’s office to spark a closer evaluation of the case facts.
Three months later, the case still had not been filed, leading our office to safely conclude that this case was a DA reject.
For more information about domestic violence, please click on the following articles:
Contact us.
Serving Torrance, Long Beach, Compton, Airport Courthouses and Other Courthouses.