Our client had recently married a woman with four children (two girls and two boys).  Eight months later, the mother found out our client, age 32, had been secretly videotaping her sixteen year old daughter while she showered.  Police investigated the situation and found out he had also masturbated in front of the sixteen year old girl.  When the mom confronted our client about the tape that she found on an I-phone, our client ran down the street, never to return.

In 50 Words or Less:  Long Beach, client accused of felony molesting a minor (Penal Code 647.6) for filming stepdaughter in shower, case resolved for misdemeanor violation of 647.6(a)(1).

The client called Greg Hill & Associates after the Harbor Division of the Los Angeles Police Department began calling our client for an interview.  Greg Hill spoke with the client and was told the allegations.  Greg Hill then contacted the investigating detective and clearly told him that our client would not submit to an interview.

The detective proceeded to describe the stepdaughter’s allegations, which clearly constituted felony conduct, and threatened to arrest our client at work if he did not report to the Harbor Division Station immediately. 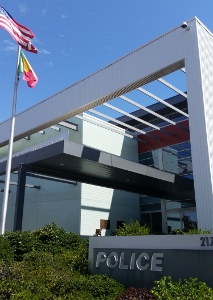 Los Angeles Police Department - Harbor Station
Our experience with such interviews is that the client can inflict irreparable damage on himself without knowing his words corroborate the victim’s often false claims.  The client can also be immediately arrested and held on bail of close to a million dollars.  Such interviews are to be avoided.  Greg told the detective no such interview would take place.

Instead, Greg advised the detective that our client would appear in court if a criminal complaint were filed.

Approximately two weeks later, the detective telephoned Greg and advised that a misdemeanor complaint had been filed.  Bail was set at just $30,000.  Greg arranged a bail bond for the client and the next day, reported to court with the client.

The judge doubled bail to $60,000 upon the request of the Los Angeles City Attorney who was sickened by the allegations and furious that Greg Hill had prevented an interview of the client.  She called our client sick and deserving of many years in prison, but the evidence did not permit it.  The client was thus remanded into custody until the client’s brother could bail him out.

The deal negotiated was that our client would have to serve 28 day of community labor, 52 sexual compulsion anonymous classes. register for life as a sex offender and serve three years of informal probation.  It was not a great deal, but the client had avoided a felony from the outset, which infuriated the prosecutor throughout the case.