City of Irvine Municipal Code Section 4-14-803 requires registered sex offenders to obtain written permission from the Irvine Police Chief or Irvine Director of Public Safety before entering a city park, if the victim of the offense was a minor.

A city park is broadly defined as community parks, neighborhood parks, the Orange County Great Park, open space preserves, trails, including structures thereon, and “all other lands and facilities under the ownership, operation or maintenance of the City that are utilized for public park or recreation purposes whether passive or active.”

This local ordinance seems to conflict with state law that contained a comprehensive statutory scheme regulating the daily life of sex offenders to reduce the risk of an offender committing a new offense.

Jeanpierre Cuong Nguyen is a sex offender required to register with local law enforcement under Penal Code § 290.  In September, 2012, he entered a public park in the City of Irvine without first obtaining written permission from the Irvine Police Chief or the Irvine Director of Public Safety. 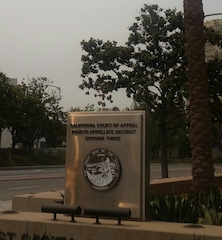 CA 4th Appellate District Division 3 OC
After learning of Nguyen having entered the park, the Orange County District Attorney filed a misdemeanor complaint against Nguyen for violating Irvine Municipal Code § 4-14-803.
Nguyen demurred to the complaint, arguing 4-14-803 was preempted by state law because state law was so comprehensive to be considered intending to fully occupy the field and preempt local ordinances intending to occupy the field.  Nguyen also said the local ordinance was unconstitutionally vague.  Lastly, Nguyen argued that the ordinance was unconstitutional by infringing on his fundamental constitutional freedom of assembly.

The Orange County trial court sustained Nguyen’s demurrer and dismissed the complaint.  The judge held that state law preempted the local ordinance and that the Irvine municipal code at issue was unconstitutionally vague and overbroad.

Nguyen argued that state law impliedly preempted 4-14-803 by fully occupying the field it regulates.  The reasoning is that “the subject matter has been so fully and completely covered by general law as to clearly indicate that it has become exclusively a matter of state concern.”  American Financial Services Assn. v. City of Oakland (2005) 34 Cal. 4th 1239, 1252.  American Financial further addressed the issue, stating that “if the subject matter or field of the legislation has been fully occupied by the state, there is no room for supplementary or complimentary local legislation, even if the subject were otherwise one properly characterized as a “municipal affair.”” Id., at 1253.

The appellate court then had to decide whether the state legislature enacted a comprehensive scheme concerning the daily activities and whereabouts of a sex offender’s daily life so as to fully occupy the field.  In looking to the text of Penal Code § 290, the language reads that its goal is to create a “standardized, state wide system.”