Our client, age 24, was stopped on the 710 Freeway for impeding traffic due to his slow speed, a violation of California Vehicle Code § 22400.

Our client was on his way home from the hospital, with his wife driving a separate car behind him with her blinkers flashing to alert approaching traffic of our client’s slow-moving car. The client and his wife were at the local hospital, visiting his mom who was a patient there.

It had been a rough last few months for our client, as his sister passed away unexpectedly, and our client had turned to marijuana to relax and just handle the stress. So when the officer pulled over our client and did not detect the odor of alcohol, he asked our client if he had smoked marijuana recently.

Our client answered that he had indeed smoked a bowl of marijuana earlier in the day, about ten hours earlier. The client also explained to the CHP officer that his car’s right-side transmission input shaft had a lot of play, as it had worked its way loose, so he could not drive his car over sixty miles per hour without it shaking violently. He told the officer that he was planning on having it fixed as soon as he could get the money to do so, but the officer seemed skeptical. 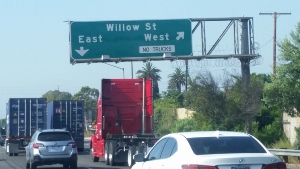 SB 710 Willow
Based on our client admitting that he had smoked marijuana and based on the officer’s observations of our client’s driving, the officer then asked our client to perform various field sobriety tests. In describing field sobriety tests to clients, we often remark that the police would most likely find a sober person to fail the tests, as the tests are very subjectively viewed, often administered improperly and often given in poor lighting conditions on the side of a highway with speeding cars just feet away. This was true with our client, who was 100% sober and not under the influence of marijuana. However, the CHP officer decided our client had failed the field sobriety tests and arrested him.

Our client was later released on his own recognizance (OR) and called Greg Hill & Associates.

The client spoke with Greg Hill and described what had happened. Greg listened and suggested that the client immediately take his car to a well-known auto repair shop such as Pep Boys or Sears to diagnose and document the mechanical issue that limited the car’s speed. This documentation would serve to refute an allegation that the slow driving was caused by impairment due to marijuana and to corroborate exactly what he told the CHP officer.

Greg expressed confidence that the DMV would not suspend his license because his blood alcohol content was 0.0% and the DMV’s admin per se criteria only involved alcohol. Nonetheless, it was critical that Greg Hill & Associates reserve a DMV Hearing for the client to prevent imposition of the automatic suspension for failing to reserve such a hearing within ten days of the arrest.

The client was confused about this, asking why the DMV would suspend his license if there was no BAC listed on the police report. Greg had to explain that the suspension would be imposed automatically simply by the client not reserving a hearing. The client then understood how the DMV worked and was thankful he had retained Greg Hill & Associates for this simple reservation.

Sure enough, the DMV did not suspend the client’s license and set aside the suspension, which was stayed due to the reservation. The client was very happy with this.

For more information about DMV hearings, please click on the following articles: