Our client, age 34, was having a romantic affair with his neighbor’s wife.  The wife’s husband was aware of this and was very angry at our client.  The neighbor lived about five or six houses up the street, or about 100 yards away.
One day, our client and his wife got into an argument in their driveway.  About a hundred yards away, the angry neighbor could see this happening and called the police, claiming that our client was fighting with his wife.
The 911 dispatcher asked the angry neighbor if anyone was injured and the neighbor said he did not know because our client and his wife walked inside their house almost immediately after starting the argument.  The 911 dispatcher pressed the neighbor: “Did you see anyone hit anyone?”  The neighbor answered no.  The 911 dispatcher, somewhat frustrated that anyone would call 911 over watching two other people argue, sarcastically asked the neighbor, “Did he hit her?”  The neighbor, apparently sensing the suggestion that a 911 call is more annoying than helpful unless it reports a crime, then said, Yes, he hit her.”
Long Beach Police Department then were dispatched to the area and the same neighbor who initially denied seeing any battery, gave a very detailed description of events that he allegedly witnessed from over 100 yards away.  He described how our client hit his wife in her stomach, making her double over in pain, pushed her to the ground and hit her in the head.
Police then asked our client, who was African American and six feet, two inches tall and weighed close to 250 pounds, if he hit his Asian wife, who was five feet tall and 100 pounds.  Our client said no, but he acknowledged that the two had argued. 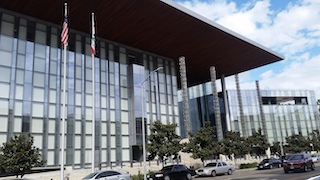 Long Beach Courthouse
The police then asked our client’s wife if our client his her and she said no, but apparently in a hesitant way.  Police did not observe any injuries to her and she refused to lift up her shirt to show officers any bruising on her abdomen.  However, she admitted that she and her husband did have an argument.
Police then gratuitously inspected the inside of our client’s parked car and found black brass knuckles in the center console.  As the reader may know, possession of brass knuckles is illegal under Penal Code § 21810.
The police then arrested our client on felony domestic violence (Penal Code § 273.5) and possession of brass knuckles.  Our client posted $50,000 in bail and was then released with a promise to appear in court about two months later in the Long Beach Superior Court.
The client trusted our legal system to realize he and his wife merely had an argument, not a physical fight of any sort.  He opted to let the public defender represent him.  The case was filed against him for misdemeanor violations of Penal Code § 243(e)(1) (battery upon a spouse, boyfriend/girlfriend or one with whom one has had or has a dating relationship) and Penal Code § 21810 relating to illegal possession of brass knuckles.
Our client was mostly concerned with having the case dismissed or resolved for an infraction because he was a security guard and needed access to a firearm.  If the case resolved as domestic violence against him, even as a misdemeanor, he would face a ten-year ban on owning a firearm under California law and a lifetime ban under the Lautenberg Amendment under federal law.
The public defender assigned to defend our client could not get the case resolved for anything less than three years of informal probation, a plea to domestic violence (Penal Code § 243(e)(1)), and the consequential loss of firearm rights for our client.
The client then called Greg Hill & Associates and spoke with Greg Hill.  He explained the facts of the case and how the 911 caller had a grudge against him for having an affair with the caller’s wife.  He further explained how he and his wife had been married for six years and had three kids together.  He also explained how he had no prior criminal history except for a shoplifting conviction from sixteen years earlier when he was 18 years old.
Greg asked what the current offer in the case was and the client described what it was.
Greg then substituted in on the case and was able to listen to the 911 call.  Greg then discussed the problems with the 911 caller’s description of what he was allegedly witnessing and how his story to the police was quite enhanced later, once he realized the power he had over our client’s potential arrest.
The Long Beach City Prosecutor agreed with Greg’s observation about the 911 caller’s curious increase in detail over time and how this affected his credibility.
Greg suggested dismissal of the case, as a jury might similarly conclude that the 911 caller was fabricating his story, but the prosecutor rejected such a suggestion, instead offering to resolve the case for one year of informal probation, a plea to trespassing and an agreement that our client would not have any firearm or weapons restrictions.
Greg chose to resolve the case as Penal Code § 602(r), trespassing on a ski slope, so that the client could explain that this conviction was not likely to reoccur and that his job would not be affected, as the client was not a ski instructor or ski resort employee.
The client was quite happy that he had opted to replace the public defender with Greg Hill & Associates.
For more information about domestic violence and the issues in this case, please click on the following articles:
Contact us.
Serving Torrance, Long Beach, Compton, Airport Courthouses and Other Courthouses.