Sometimes, “overcharging” a case can really make a difference in how a case is viewed.  It the following case, our client had a history of being “overcharged,” but in the end, we were able to resolve his case out of Long Beach on terms that recognized how his prior criminal history was overstated, as well as the current case.
Years ago, he had been sentenced to two years in state prison on a stalking case with a prior girlfriend, who lied to the police about our client following her around, when in fact she really just wanted to be with her new boyfriend and could think of no better way to make our client “go away” than to send him to prison, which she did for a two-year sentence.
Three years earlier, this same woman had fabricated charges against her prior boyfriend and bragged about doing so, as if she was announcing how powerful and persuasive she could be.  Indeed, no sooner did she brag about this than she did the same thing with our client.
Our client was vulnerable to this, she understood, because four years earlier, he had been convicted of false imprisonment (Penal Code § 236) and kidnapping (Penal Code § 207) with the same woman when he got in an argument with her and drove her back to her own home.  Kidnapping, as the reader may appreciate, is a strike offense under California’s Three Strike Law.  Indeed, for this crime, our client was sentenced to state prison for two years.
Turning to the present case from Long Beach, our client was at a family gathering.  His father-in-law was there.  He had a tendency to drink a great deal and become talkative.
Our client and his father-in-law were drinking quite a bit when the father-in-law told our client that he was “not good enough” for his daughter.  Our client obviously took this personally and, from just across the table, threw his beer bottle at his father-in-law.  A fight erupted with our client being bitten quite severely in his abdomen, although he was not sure if it was by his father-in-law or his brother-in-law.
The bite was significant enough to send our client to the hospital for stitches, but not before he allegedly told his father-in-law “I’m going to kill you!” 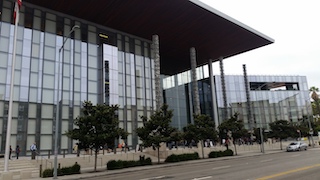 Long Beach Courthouse
When police responded to the scene and saw that an older man, about 55, had been hit by a beer bottle, they immediately arrested our client.  Bail was set at $120,000 ($100,000 for the prior strike and $20,000 for the criminal threats), which our client posted and then called Greg Hill & Associates.
The client spoke with Greg and explained what had happened.  He also explained his criminal history and what the police told him they were going to recommend as charges.
He also explained that his father-in-law had told his (our client’s) wife that he never felt that his personal safety was at risk when he heard our client tell him “I’m going to kill you,” which meant the threat did not meet the legal standards for a violation of Penal Code § 422 (criminal threats).
Our client also explained his work situation as a commercial truck driver, wherein he often would deliver products as far away as Utah and Texas from the port.
At the arraignment in the Long Beach Superior Court, Greg and the client appeared, a bit nervous for the array of charges that could be filed (battery, criminal threats, assault with a deadly weapon and even trespassing because the fight took place at his in-law’s home).  The case against our client was for just criminal threats, but the People’s initial offer was four years in state prison (two years doubled).
This was a tough starting point, but the client enrolled in a court-approved anger management program and began attending Alcoholics Anonymous.
Greg assembled a Defense Position Letter and the client provided Greg with a “Good Guy” packet of materials showing he attended church frequently and worked.
Greg then submitted the Defense Position Letter and the client’s “Good Guy” packet to the Long Beach District Attorney’s Office, suggesting that the client’s criminal history was dramatically overstated and that this case, too, was overcharged.  Greg suggested that this case resolve instead for a violation of Penal Code § 245(a)(4), assault with a deadly weapon, with our client being placed on three years of formal probation with no prison or jail, but an obligation to attend 52 anger management classes, perform 40 hours of approved community service and stay away from his father-in-law.
Much to Greg’s surprise, the DA agreed.  The client was extremely happy to avoid four years of state prison and instead remain free to work and support his family.
For more information about criminal threats and assault with a deadly weapon, please click on the following articles:
Contact us.
Serving Torrance, Long Beach, Compton, Airport Courthouses and Other Courthouses.