Our client worked as an armed security guard for a major money transportation company.  He was 30 years old and, given the sensitive nature of his job, it should come as no surprise to the reader that he had no criminal history.
However, the lack of a criminal history did not mean he was invulnerable to lapses in judgment.
Indeed, one evening, as he was out with his girlfriend, the Long Beach Police Department made a traffic stop of his car near the intersection of Third Street and Redondo in downtown Long Beach.  The stated reason for the stop was that the client’s 2015 BMW 328i had a modified exhaust system that made it very loud, in violation of Vehicle Code § 27151(a), and illegal tinted windows in violation of Vehicle Code § 26708(a)(1).
After talking with our client, police noticed our client’s armored vest laying in the backseat of his car (with the name of his employer in large white letters on the back) and asked for consent to search the vehicle.  Our client allegedly gave such consent.
Police then rummaged about the car, opening up the glove compartment and finding a Springfield XD 9 millimeter handgun with a loaded clip next to it.  The gun was registered to our client.
The officers asked our client whether there was additional ammunition in the car anywhere and our client said he did not consent to a further search of the car.
Officers then arrested our client and decided to impound the car as evidence, so they conducted an inventory search of the car (an exception to the warrant requirement), finding 40 rounds of 9 millimeter ammunition in the driver’s side door pocket. 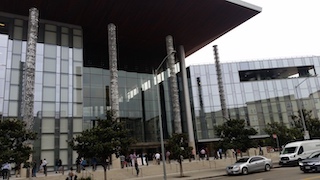 Long Beach Courthouse
Our client was then arrested on suspicion of violating Penal Code § 25400(a)(1), carrying a concealed firearm, and taken to the Long Beach Police Department, where he spent the night.
Upon being released, he contacted Greg Hill & Associates and spoke with Greg Hill about the facts of his case.  He explained that he kept the firearm for his own personal safety because he often had to park his car in a rough area and walk to his apartment, which meant going through an area frequented by gang members.
He explained that he had a firearm safety certificate that he had to have for work.  He had no prior criminal history and had only recently started working for the cash delivery service after years of working in the insurance industry.  Sadly, his employed suspended him upon learning of his arrest on the firearm charge.
Greg recommended that the client immediately enroll in and complete a firearm safety course through 360 FST on Cabrillo Avenue in Torrance, just for the certificate of completion that Greg could use to send to the Long Beach City Prosecutor’s Office to request an office hearing.  Greg further explained how such cases are handled in Long Beach if the case was not referred to an office hearing.
Greg cautioned the client that because the offense involved a firearm, an office might not be available, but Greg would request it anyways.  Greg also asked for proof of employment from the client and the client’s firearm safety certificate from work.
Greg then mailed off the letter to the Long Beach City Prosecutor’s Office requesting an office hearing.
No response was given to our letter, so Greg appeared at the arraignment on the client’s behalf.  Much to Greg’s surprise, the initial offer for the client was a plea to the 25400(a)(1) charge, with three years of summary or informal probation, 30 days of county jail or Cal-Trans, a $300 fine plus penalties and assessments (total of about $1,250) and an agreement to destroy the weapon.  The Long Beach City Prosecutor’s Office did not adjust the offer downward upon seeing that our client had taken a safety firearm handling course or upon seeing our client was employed.  It meant nothing to them that our client had no prior history and was 30 years old.
This was in September, 2020.  Greg glumly reported the plea bargain offered by the Long Beach City Prosecutor’s Office, but knew, from reading the legal newspapers, that the state legislature was debating a new bill, Assembly Bill 3234, that would make judicial diversion the law on most misdemeanor cases in California.
Greg told the client not to panic, but that it would be smart to wait on seeing if the new law was passed and whether it would exclude certain misdemeanors from its provisions.  Greg knew that domestic violence and possibly DUI would be excluded.
This “wait and see” approached proved valuable, as the law was passed (it was codified at Penal Code §§ 1001.95 to 1001.97) and became effective on January 1, 2020.  Greg had since then “dragged out” the case until the first week in January and at that time, requested that the judge impose judicial diversion for the client.
The judge granted this request, putting the case on a one-year term of diversion with the only requirement that the client perform 24 hours of community service.  The client was very happy with this because upon completion of the diversion, the case would be dismissed under Penal Code § 1385 and the record sealed, which meant our client could return to his job delivering cash after all.  He would also be able to regain his firearm, which really made him happy.
For more information about judicial diversion and carrying a concealed firearm , please click on the following articles:
Contact us.
Serving Torrance, Long Beach, Compton, Airport Courthouses and Other Courthouses.