Home
Other Information
Criminal Defense Articles
What is the New Judicial Diversion Law for 2021?

What is the New Judicial Diversion Law for 2021?

On September 30, 2020, Governor Gavin Newsom signed Assembly Bill 3234, which sets forth a permanent judicial diversion program for California defendants in misdemeanor offenses, with some exceptions.  The bill is codified at Penal Code §§ 1001.95 to 1001.97.
Unlike AB 2124, a prior judicial diversion program that was just offered in Los Angeles County from 2015 to 2017, AB 3324 has no “sunset provision” and is applicable throughout California.

Summary in 40 Words or Less: The new judicial diversion law at Penal Code §§ 1001.95 – 1001.97 applies to most misdemeanors (not domestic violence, stalking or 290 registrable offenses).  It is debatable if it applies to DUI.  The period of diversion is up to two years.

The new program authorizes a judicial officer, in his or her discretion and over the prosecution’s objection(s), to order a case proceedings suspended for up to 24 months while an eligible defendant complies with the judge’s orders and/or completes certain classes, performs community service or Cal-Trans, etc.
The goal is to educate those charged with misdemeanor offenses about avoiding such conduct in the future without scarring the person with a criminal record, stigmatizing that person for life, and affecting his or employment, education, ability to rent or own real estate, qualify for loans and participate in volunteer activities.
The new program does not apply to misdemeanor stalking (Penal Code § 646.9), domestic violence (both Penal Code § 273.5 and Penal Code § 243.1(e)) or any misdemeanor that requires registration under Penal Code § 290 (sex offender registration) if convicted. 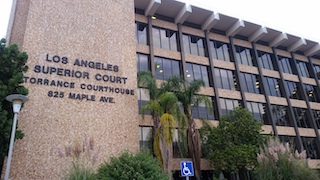 Torrance Courthouse
Please notice that DUI is not excluded from this program, although in mid-December 2020, it is widely expected that the bill will be amended to exclude at least second and third time DUI cases and maybe even first-time DUI.
The program also does not disqualify someone from consideration if he or she has received diversion in the past.  We also think this may be added to the program terms.
Upon completion of the program, the judge will order sealing and destruction of the police report and court file and legally, the record of the case filing shall be treated as if it never existed except for those applying for employment within law enforcement and for purposes of the prosecution considering one’s criminal history.  In other words, prosecutors will be aware that one was afforded 3234 relief in the past and argue to the judge about denying such a program, which the judge may, in his or her discretion decide.
We would anticipate that the terms of diversion will be similar to the terms traditionally associated with the terms of probation for the crime at issue.
Assembly Bill 3234 also modifies Penal Code § 3055 concerning Elderly Parole to allow consideration of an inmate for parole at age 50 if that inmate has also served at least 20 years in prison.  This is changed from the prior Elderly Parole eligibility limit of 60 years old and having served a minimum of 25 years in prison.
With the new judicial diversion program, it is good to understand its provisions insofar as they overlap or relate to specific misdemeanor crimes in Los Angeles County under the new policy directives issued by George Gascon within hours of being sworn in as District Attorney for Los Angeles County.
Mr. Gascon seems to take the underlying approach toward misdemeanor offenses one step further in Los Angeles County his Special Directive 20-07 concerning misdemeanor filings, directing his deputy district attorneys to no longer file cases, with certain recidivism and family violence exceptions, for violation of:
We believe that when the defendant has no substance abuse disorder and/or mental illness, or is not homeless, or the DA seeks a deviation from the policy in writing and the supervisor so agrees (i.e., because the prostitution case arose in an area recognized as being frequently used to promote or further human trafficking, or drug sales, or drug use) the case will be filed, but then a good defense attorney will request judicial diversion.
For more information about diversion and sealing a record, please click on the following articles:
Contact us.
Serving Torrance, Long Beach, Compton, Airport Courthouses and Other Courthouses.