Our client, age 24 and with a prior conviction for domestic violence and on probation for this prior incident, was arrested in the early morning hours after being found allegedly yelling and making moaning noises in front of a female’s home in Long Beach.  Police officers characterized our client as a prowler.

Without All the Details, What Happened?:  Long Beach, client on probation for domestic violence, commits battery of a police officer, case resolved for misdemeanor criminal threats and 15 days of community service.

When police officers arrived, they instructed our client to move away from the house, but instead, he grabbed the home’s front door knob and tried to enter the house, which was locked.  Our client was from New York on a vacation here and did not know the resident of the home.

Officers then instructed our client to move away from the front door, but our client allegedly assumed a fighting pose with both hands raised as if ready to fight.  Officers then drew their batons and our client followed instructions, allegedly mumbling incoherently.

When at the police station, he then allegedly scuffled with police officers when they had to remove his handcuffs for a short time.  He later began yelling at the top of his lungs while in the jail.

Originally, our client was told by police that he would be charged with three felonies for battery on two police officers and assault to a police officer. 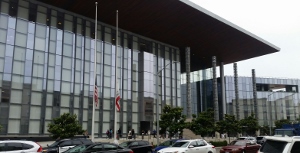 Governor George Deukmejian Courthouse in Long Beach
The 24 year old client’s single mother was extremely interested in the case from the outset and in constant communication with our office, much more than the client himself.  We agreed with the mother that at some point in the case, a letter from her to the District Attorney handling the case might be helpful.  The mother worked furiously on the letter and, without our approval, sent the letter to the judge himself.

Greg Hill of Greg Hill and Associates was thus faced with the delicate task of preventing the District Attorney from refiling the case as a felony, which at the same time trying to negotiate a plea bargain that satisfied the client, who believed because he was interested in becoming a police officer in New York, that the District Attorney was obligated to treat his case with deference.

The first offer from the District Attorney involved 30 days of county jail.

Through several rounds of challenging negotiations with a District Attorney who viewed our client as a spoiled prima donna with a sense of entitlement, Greg Hill was able to sweeten the offer to twenty, then fifteen days of county jail and then the equivalent in community service, which the client accepted, along with being on summary probation for three years and a stay away order for three years from the “victim’s” home.  Our client will complete his community service in New York.  The District Attorney also agreed to dismiss the charges of battery to a police officer and disorderly conduct.