Our client and his girlfriend argued one morning as he was heading out the door to work.  He had placed his zip drive from work on his dresser and his girlfriend, he believed, had cleaned up the room, accidentally knocking the zip drive off the dresser somewhere where it now could not be found.  This enraged our client, age 53 and with a minor criminal history for DUI and narcotics.

As your client frantically searched for his zip drive, his girlfriend attempted to help.  In moving about, he bumped into her and she perceived it as intentional.

The girlfriend immediately called the Lomita Sheriffs and our client jumped in his car to leave.  The 911 call to the police stated that our client had pushed her against a wall, that he had hit her in the past and that he left with his “crank” (street name for heroin), pot and coke.

Police arrived, but did not find the girlfriend injured.  She had no red marks on her skin, no bruises or any scrapes as might be expected from being pushed up against a wall. 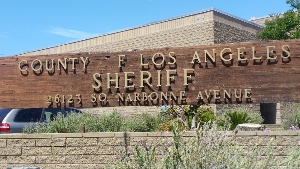 Lomita Sheriff's Station
Our client later returned home only to find out that a bench warrant had been issued for his arrest.

Worried that he might spend considerable time in jail, he contacted Greg Hill & Associates.  He also knew that his girlfriend lied to the police in her phone call, exaggerating her injuries in an attempt really just to get law enforcement to intervene quickly, which would have the practical effect of minimizing her losing the zip drive or at least making its being lost overshadowed by his domestic violence case.

Greg met with the client, who explained he backed up into his girlfriend accidentally as he was bending over, looking on the ground, searching for his zip drive.  He remembered that she claimed he intentionally bumped her, but he insisted it was accidental, as he could not even see her.

Greg then appeared in the Torrance Superior Court and had the bench warrant recalled, which was of great relief to the client.  Greg then received the police report, which he shared with the client, as well as the 911 call which was concerning because it sounded very much like an excited utterance (which meant it was an exception to the hearsay rule which would otherwise makes such a call inadmissible).  Police had arrived at the home within three minutes of the call.

Greg appeared in the Torrance Superior court many times over the next four months, explaining to a dubious prosecutor that our client’s touching of the girlfriend was not a punch or push as is so often seen in such cases.  Rather, it was a push using his backside, and unintentional.  Realizing that a jury could agree with such an argument, the prosecutor reduced the terms of the plea bargain to a $500 contribution to a battered women’s shelter (a mandatory minimum punishment in any domestic violence case), a $100 fine and a 52-session batterer’s program.  Our client then began the program at the rate of two per week, before agreeing to the plea bargain.

Finally, the case did resolve and the judge, hearing this, promised to terminate probation when our client completed the batterer’s program.  She was apparently unaware that our client had completed almost the entire program already.

Six weeks after entering the plea, our client and Greg Hill appeared in court to request early termination of probation, just 42 days after the plea had been offered.  The judge appeared surprised that this had been done, but in accordance with her promise, terminated probation early.  The client now stood eligible for expungement, barely over a month from the date of the conviction.  He was happy not to be on probation more than anything else.

For more information about the issues raised in this summary, click on the following articles:
Watch our Video about Domestic Violence by clicking here.