Our client, age 58, had been married to his wife for 23 years and had dated and lived with her 10 years before being married.  They had raised two children, who were now adults.  He worked in a digital arts company and she stayed at home, in their home in Lomita.
One evening in the late summer, after dinner, the couple were washing dishes.  A scrub pad became caught in the kitchen sink garbage disposal and our client reached up to turn on the garbage disposal.  The sink was backed up with water at the time.
Unbeknownst to our client, his wife had stuck her hand into the sink just a split second before our client turned on the garbage disposal.  Once our client’s wife heard the garbage disposal turn on, she reflexively pulled back her hand without any injury.  There was no argument preceding this and the client apologized for almost injuring her.
Ten days later, our client’s wife was meeting with her psychologist for a routine visit and mentioned to the psychologist that she thought our client had intentionally tried to injure her hand in the garbage disposal incident over a week earlier.  She told her psychologist that her fingers were injured. 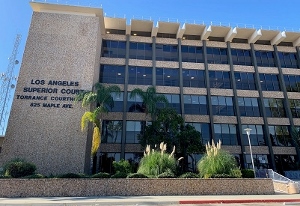 Torrance Courthouse Photo
The psychologist asked to look at her hand, but the hand of the client’s wife looked fine.  In fact, the client’s wife had her fingernails manicured the day after the incident, something that would not be possible if her fingers had been cut or injured.  Nonetheless, the psychologist then reported the incident to the Lomita Sheriffs, who promptly arrested our client.
Our client insisted it was an accident or a misunderstanding.  He had no prior history in the last thirty years.  He told the police that his wife was not injured at all because he asked her if she was injured and she said no.  Had she been injured, moreover, he would have immediately asked to see any injury sustained.  He further noted that his wife had a manicure the following day, which might have been painful if she had been injured as she claimed.
Bail was set at $50,000 for felony domestic violence.  He quickly posted bail and was released, but he was barred from returning home because his wife had sought an emergency protective order against him.  His arraignment was set approximately two weeks later, which was a surprisingly short time (most arraignments are about six to eight weeks after one posts bail).
After he was released, he called several attorneys, but retained Greg Hill & Associates.  Greg and the client discussed the case facts and how the client’s wife actually was not hurt at all, but startled.  Moreover, the client lacked the criminal intent to injure his wife, as he quickly apologized and asked her if she was hurt.
Greg then told the client that he would immediately write the Lomita Sheriff’s Department and the Torrance District Attorney’s Office to request a no-file recommendation from the Sheriff’s Department and a no file decision from the District Attorney’s office, respectively.  In the alternative, Greg would recommend an office hearing because the wife was not even injured, so no battery or domestic violence actually took place.
Each letter also requested a copy of the police report, any audio recordings (of, for example, the call from the psychologist and any interview of the client’s wife) and supplemental report(s) (as are common in domestic violence cases), as well as any photographs of injuries, the dispatch log (if it was generated).
Greg then wrote both letters immediately.  He hand-delivered the letters to both the Lomita Sheriff’s Department and the District Attorney’s Office to demonstrate the sense of urgency to each.
There was no response to either letter.  While this was not uncommon, it was unnerving because the client very much did not want to appear in court, even if only for a misdemeanor.
Greg then appeared in the Torrance Court on the date of the arraignment and found out that the case was a DA reject.  This was great news for the client.  Neither he nor Greg knew or would know if Greg’s letters or the sense of urgency shown caused the Sheriffs and/or the District Attorney to look more closely at the case, but it was a tremendous relief to the client.
For more information about domestic violence cases, please click on the following articles:
Contact us.
Serving Torrance, Long Beach, Compton, Airport Courthouses and Other Courthouses.