In March 2010, our client was arrested by the Lomita Sheriff’s Department for alleged domestic violence.  That day, our client was on his way to drop off his four kids at school and proceeded to the Lomita Sheriff’s Station to explain to the deputies what had transpired at his residence in Rancho Palos Verdes the day before.  While he was waiting to speak to a deputy, two other deputies rushed at him knocking him to the ground in front of his four young children.  In his shock, the deputies arrested him at the station for domestic violence

What preceded the arrest was a very sad and tragic story for our client and his family.  Since the birth of their son in 2008, our client’s wife had been depressed and suffering mental illness.  She explained to her husband that she had an overwhelming feeling that something bad was going to happen to the children.  This frightened our client
And his wife’s despair continued for many years without intervention.  His wife refused to seek treatment for her mental health issues.

The incident that led to our client’s arrest began almost a month earlier.  On that day, he came home after work to find his wife making strange comments and saying she was convinced that he was the father of a child in Nigeria, her native country.  This was a false statement.  Over the next few days, her behavior and comments escalated with her visiting neighbors, making delusional statements to them.  Friends became concerned for her well-being.  The police were called at least four times to their residence.

Eventually, our client was able to have his wife hospitalized through the PET TEAM, a mental health services resource.  She was recommended to stay in-patient for over fourteen days; however, she left the facility against medical advice.  Her erratic behavior continued with accusations not only against her husband, but also her friends.  After she returned home, she called the police to their home more than twelve times for different issues of paranoia.

About two weeks later, she served divorce papers on our client at their home and insisted he vacate the premises.  He refused because he was told by medical personnel to not leave the children alone with her.  This made her irate, so she contacted her attorney who stated over a speaker phone for her to call the police and report our client was fighting with her.  Nana contacted the police and our client left the home. 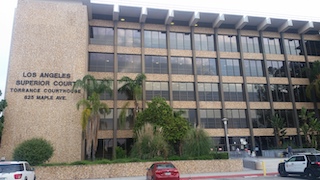 Torrance Courthouse
The police contacted our client via his cell phone.  He informed them of his wife’s mental health issues and told the deputy he would come by the station the next day to speak to the commander familiar with their situation.  The next day, he was arrested for domestic violence when he arrived at the sheriff’s station and a case was filed in the Torrance Superior Court.

In November 2010, the judge in Torrance promised him that if he enrolled in and completed fifty-two weeks of domestic violence classes, his case would be dismissed.  Then, about a year later, our client completed these fifty-two classes and the judge  granted dismissal in the furtherance of justice under Penal Code § 1385.
Eight years later, however, having a mere arrest for domestic violence was preventing our client from obtaining new contracts in his adult day care program and had caused him to lose existing contracts.  He heard about sealing and destroying a record, so he called Greg Hill & Associates and spoke with Greg Hill.

Greg Hill & Associates then prepared the petition to seal and destroy the police report and related court records, supplementing it with a short points and authorities and a declaration from our client as to the facts of the case and the difficulties having a criminal history has cause his business.  Our office then filed the petition with the court.  Our office also served it to the Lomita Sheriffs and to the Torrance District Attorney’s Office.

The judge in Torrance granted the petition without much of a hearing, as the District Attorney’s Office had no opposition to it.  Our client was very happy.
For more information about petitions to seal and destroy, please click on the following articles:
Contact us.
Serving Torrance, Long Beach, Compton, Airport Courthouses and Other Courthouses.