Brief Synopsis: A prosecutor’s use of peremptory challenges to dismiss jurors based in a racially discriminatory manner can lead to multiple retrials, as the following case summary of a murder in Mississippi of three whites and a black, allegedly by a black man, epitomizes.

In 1996, in the small town of Winona, Mississippi (a small town in northern Mississippi about halfway between Memphis and Jackson), four employees, three of which were white, of the Tardy Furniture store were murdered in the store.
In 1997, the State of Mississippi charged Curtis Giovanni Flowers, who is black, with the murders.
Since then, he has been tried six different times for the murders.  In each of the first two trials, Flowers was tried for one individual murder.  In each subsequent trial, he was tried for all four murders together.  The same state prosecutor, who is white, tried Flowers each time.
At Flowers’ first trial, 36 prospective jurors – 5 black and 31 white – were presented to possibly serve on the jury.  The prosecutor exercised a total of 12 peremptory strikes and it used 5 of them to strike the five qualified black prospective jurors.  Flowers objected, arguing that under Batson (Batson v. Kentucky (1986) 476 U.S. 79) the State had exercised its peremptory strikes in a racially discriminatory manner.
The trial court judge rejected the Batson challenge.  Because the trial court judge allowed the state’s peremptory strikes, Flowers was tried before an all white jury and was convicted and sentenced to death. 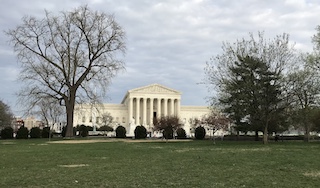 U.S. Supreme Court
On appeal, the Mississippi Supreme Court reversed the conviction, concluding that the State had committed prosecutorial misconduct in front of the jury by, among other things, expressing baseless grounds for doubting the credibility of witnesses and mentioning facts that had not been allowed into evidence by the trial judge.  Because the Supreme Court of Mississippi found prosecutorial misconduct, it did not rule on the Batson claim.
In the second trial, the State again used all its peremptory challenges to remove the black jurors and the jury convicted Flowers and the judge sentenced him to death.  On appeal, the verdict was again reversed on prosecutorial misconduct grounds.
In the third trial, the State again used all 15 of its peremptory strikes and the jury convicted Flowers again and the trial court again sentenced him to death.  On appeal, the Mississippi State Supreme Court reversed again, this time finding that the State exercised its peremptory strikes on the basis of race in violation of Batson.
The fourth and fifth trials ended in mistrials.
In the sixth trial, the State exercised six peremptory strikes – five against black prospective jurors, allowing one black juror to be seated.  Flowers again raised a Batson challenge, but the trial court judge concluded the state had offered race-neutral reasons for each of the five peremptory strikes.  The jury convicted Flowers and sentenced him to death.  The Mississippi State Supreme Court affirmed.
The U.S. Supreme Court vacated that judgment and remanded the case in light of Foster v Chatman (2016) 578 U.S. ___.  The Mississippi State Supreme Court again upheld Flowers’ conviction on the Batson issue.
Flowers then appealed again to the U.S. Supreme Court, which reversed the Mississippi Supreme Court.
Its reasoning is what this writer wants the reader to understand.  Under Batson, once a prima facie case of discrimination has been shown by the defendant, the State must provide race-neutral reasons for its peremptory strikes.  The judge must then determine whether the prosecutor’s stated reasons were the actual reasons or instead were a pretext for discrimination.
The Batson court itself rejected four common arguments.  First, it rejected the idea that a defendant must demonstrate a history of racially discriminatory strikes in order to make a claim of racial discrimination.  Second, it rejected the argument that a prosecutor could strike a black juror based on an assumption or belief that the black juror would favor a black defendant.  Third, it rejected the argument that race-based peremptories should be permissible because black, white, Asian and Hispanic defendants and jurors were all “equally” subject to race-based discrimination.  And fourth, it rejected the argument that race-based peremptories are permissible because both the prosecution and defense could employ them in any individual case and in essence balance things out.
In finding that the State violated Batson in the sixth trial, the U.S. Supreme Court said Mississippi’s history of peremptory challenges in Flowers’ first four trials strongly supports the conclusion that the state had a discriminatory intent.  Moreover, the state spent far more time questioning the black prospective jurors that the accepted white jurors.  There were 145 questions asked of five black jurors, but just 12 questions asked for 11 white jurors.
The verdict was thus reversed and remanded for a seventh trial.  We would expect Mississippi to change the prosecutors involved and be even more careful about its selection of potential jurors.
The citation for the United States Supreme Court ruling discussed above is Curtis Giovanni Flowers v. Mississippi (2019) 588 U.S. ___,139 S. Ct. 2228, 204 L. Ed. 2d 638.
For more information about selecting a jury, please click on the following articles:
Contact us.
Serving Torrance, Long Beach, Compton, Airport Courthouses and Other Courthouses.