Feliciano Covarrubias was arrested at about 3:00 a.m. on May 6, 2010 at the San Ysidro Port of Entry coming from Mexico to California with 193 pounds of marijuana hidden in his Ford F250.  A dog specially designed to detect narcotics smelled the marijuana.

The Reader’s Digest Version:  Appellate Court rules that lower court judge erred by allowing an ICE agent testify to the jury at trial about “blind mules” and the structure of drug cartel operations because defendant was not shown to be part of a drug cartel or charged with conspiracy to import drugs.

The San Diego County District Attorney’s Office subsequently charged him with possession of marijuana for sale (Health and Safety Code § 11359) and transporting more than 28.5 grams into California (a violation of Health and Safety Code § 11360(a)).  Covarrubias was convicted and sentenced to three years of formal probation with various conditions and 240 days in jail. 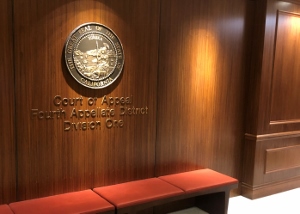 Fourth District Court of Appeal Division 1 San Diego
He then appealed his conviction, arguing that the trial court violated Evidence Code § 352 by allowing an agent from Immigration Customs Enforcement testify about the structure and practices of drug trafficking organizations, i.e. drug cartels.  The agent said he had been involved in hundreds of marijuana smuggling investigations.  He testified, furthermore, about the market price of the quantity of marijuana seized, $185,000.  Most importantly, he described what a mule was and that in his many years of experience, he had never been involved in a case involving a “blind mule,” i.e. a courier who does not know he is transporting drugs.
The clear suggestion, Covarrubias’ attorney argued, was that Covarrubias was a professional mule for a drug cartel and therefore, jurors easily found him to have the mental state necessary for guilt.  Covarrubias’ attorney characterized the agent’s testimony as “profile / modus operandi evidence” to further a stereotype of a drug courier in his client.

In short, it was more prejudicial than probative, especially because the prosecution failed to show Covarrubias was associated with a drug cartel at all, as he was not charged with conspiracy to import drugs.

The prosecution argued that such evidence was relevant and probative to disprove Covarrubias’ defense that he did not know there was marijuana in his truck.

The trial court in San Diego allowed the agent to testify, over Covarrubias’ objections.

In finding judicial error at the trial court, the Fourth Appellate District (in People v. Feliciano Covarrubias (2011 DJDAR 18102)), noted first the general rule with admitting any evidence: it must be relevant and have a certain minimum degree of reliability.  This makes the evidence probative to some degree.  The evidence’s effect must also not create a substantial risk of juror confusion, unfair prejudice or unreasonable delays.

In analyzing the agent’s testimony and the other evidence in the case, the Fourth Appellate District noted that unless a defendant is associated with a drug trafficking organization, profile evidence is generally inadmissible to prove guilt (although they might be helpful to law enforcement at the investigation stage).  In the case of Covarrubias, the prosecution presented no evidence whatsoever linking Covarrubias to any trafficking organization.  Therefore, since the agent insinuated that Covarrubias was part of a large-scale operation, the trial court made a mistake in allowing the agent to testify as he did.

However, the Court found “it was not reasonably probable that the verdict would have been more favorable to Covarrubias if the trial court had excluded” the agent’s testimony.  In other words, the admission of such testimony by the agent was a harmless error.  The court pointed out that when questioned by border agents, Covarrubias admitted he owned three of the seven bags containing marijuana, meaning he knew what was in the bags.  He then later changed his account once the agents revealed they knew the bags’ contents.

Consequently, the Court concluded, the verdict would have been the same even without the agent’s testimony, so the verdict was affirmed.
The citation for the Fourth Appellate District Court of Appeals ruling discussed above is People v. Feliciano Covarrubias (4th App. Dist., 2012) 202 Cal.App.4th 1, 134 Cal. Rptr. 3d 455.
For more information about drug offenses, click on the following articles:
Contact Greg Hill & Associates
Serving Torrance, Long Beach, Compton, Airport Courthouses and Other Courthouses.