Is Shackling Defendant with Leg Restraints During Trial OK?

We all can readily appreciate the impression a jury may get if a defendant is brought to court in a strait-jacket and then put on trial for a violent crime.  The message is that the judge believes the defendant is so dangerous that even several deputies cannot control him and therefore, the defendant must be put in a strait jacket.  Jurors would then perhaps be inclined to believe he was violent because of the judge’s decision to so restrain defendant.

If a fair trial is one goal of our justice system, do such restraints on defendant make a fair trial impossible?  Will defendant be unfairly prejudiced?  The following case explores this scenario.

Charles Michael Hedlund and James Erin McKinney were convicted in Arizona of first degree murder of another person, arising from two separate violent incidents in 1991. 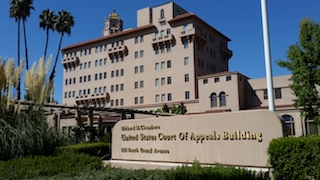 U.S. Ninth Circuit Court of Appeals Pasadena
The two defendants planned on robbing several houses.  Each promised the other that they would either murder or severely beat the occupants of the homes if anyone was home during the burglaries.  The two defendants then contacted two other people to find specific houses that were good burglary targets.  During their fourth burglary in ten days, they murdered a lady and stole $120.  Thirteen days later, they killed the second victim when he was still asleep in his bed.  They then stole his pocket watch and car.
During a pre-trial hearing in 1992, Deputy Sheriff Jack Lane became aware that Hedlund and McKinney had a plan to escape.  The plan was that one of them would “jump on one of the guards, take his on uniform and his weapon and one of them would put the uniform and they would walk out together.  They would handcuff the guard and leave him there.”  Lane heard this information from another inmate.  Apparently, McKinney also tried to escape earlier, immediately after being arrested.

The trial court was advised of this plan and ordered that both defendants wear leg braces during trial for courtroom safety.  The judge decided leg braces, if covered by the inmates’ pants, were less prejudicial than manning the courtroom with additional deputies.

Hedlund’s counsel challenged the leg braces, arguing that McKinney was the flight risk and not his client.  The court denied the request, reasoning that both defendants were being tried together, in court together, so there was danger of them acting together according to the plan.  The court tried to minimize any potential prejudice by making the leg brace less visible.  The court ensured that defendants would be seated in the courtroom before the juries arrived so the jurors would not see defendants walking in stiff-legged in the braces.

The trial court sentenced Hedlund to death and he appealed.  There were many grounds for appeal, but this article will only discuss the ruling by the U.S. District Court of Appeals for the Ninth Circuit regarding a jury trial wherein defendants were fitted with leg braces.  Was the judge’s decision on this an abuse of discretion?

In its ruling, Charles Michael Hedlund v. Charles L. Ryan (2014 DJDAR 5099), the Ninth Circuit U.S. Court of Appeals found that the use of shackling was inherently prejudicial, but was permitted and justified to further an essential state interest in preventing the escape of a prisoner.  Holbrook v. Flynn (1986) 475 U.S. 560, 568-69.  The court even cited to Illinois v. Allen (1970), 397 U.S. 337, 344, in which the court approved of fully binding and gagging an obstreperous defendant, and reminded the reader that “internal security is peculiarly a matter normally left to the discretion of prison administrators” Rhodes v. Chapman (1981) 452 U.S. 337, 350, n. 14.

The court rejected Hedlund’s argument that the court was obligated to use less restrictive alternative, pointing out that the case Hedlund’s counsel cited to was not binding.

In finding that the use of the braces was justified by an essential state interest, the court found that the question of prejudice needed no consideration.  In other words, the court only needed to evaluate undue prejudice if it found that the use of shackles was unjustified and consequently, whether defendants suffered undue prejudice at trial.  This analysis, however, was unnecessary and the trial court’s rulings on the leg braces was affirmed.
The citation for the Ninth Circuit ruling discussed above is Hedlund v. Ryan (9th Cir., 2014) 750 F.3d 793.
For more information about jury trial issues, click on the following articles:
Contact Greg Hill & Associates