Home
Other Information
Criminal Defense Articles
Is Probable Cause to Search Supported by Driver Having Pot?

Is Probable Cause to Search Supported by Driver Having Pot?

About This Article Briefly: Smelling marijuana (in 2017 after Prop 64 was passed), finding the driver with a small amount of pot in his pocket and $100 to $200 did not justify a warrantless search of the car.

On an evening in August, 2017, two San Diego Police Officers observed a gold-colored Cadillac DeVille with no front license plate and tinted windows in possible violation of Vehicle Code § 26708.  The police made a traffic stop of the car and then one officer walked up to the car to speak with the front seat passenger while the other officer walked up to speak with the driver, Brandon Lance Lee.
Mr. Lee said he did not have his driver’s license with him.  In response, the police officer asked Lee to exit the car, so he could pat him down to see if he had any form of identification on him.
During the pat down, the officer discovered a large wad of cash and a baggie containing a small amount of marijuana.  The officer then asked Lee if he delivered marijuana and Lee said “yes.”  The officer then tried to handcuff Lee, but as he was doing so, Lee “tensed up,” so the officer finished handcuffing Lee and placed him in the back seat of the police car.  Lee then told the police officer his name and date of birth.
The police then ran the names of the passenger and Lee in their police car computer and discovered that Lee had a suspended driver’s license.  The officer then asked if there was anything illegal in the car and Lee said there was not.  The officer then asked him the same question again and said the car would be searched because it was going to be impounded since he was driving on a suspended license.  Lee then offered to have someone come to pick up the car.
The officer said, “No, that’s not going to work” and began searching the Cadillac.  The officer did a very thorough search of the inside of the car and found a firearm, a large sum of cash, 56 grams of cocaine and several small digital scales.
The officer did not fill out the impound form at the scene when he performed his search.  The form was filled out by another officer who conducted his own search of the Cadillac at a later time after it was impounded.
The San Diego District Attorney’s Office charged Lee with transportation of cocaine not for personal use while armed with a firearm (Health & Safety Code § 11352(a)) and Penal Code §§ 1210(a) and 12022(c)); possession for sale of cocaine weighing more than 28.5 grams while armed with a firearm (Health & Safety Code § 11351 and Penal Code §§ 1203.073(b)(1) and 12022(c)); having a concealed firearm in a vehicle (Penal Code § 25400(a)(1)) and possession of a large-capacity magazine (Penal Code § 32310(c)). 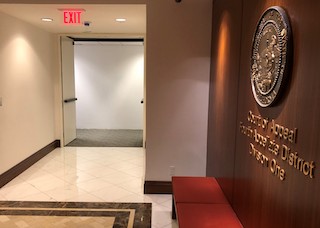 Fourth Appellate District Court of Appeal Division 1 San Diego
After the preliminary hearing, Lee filed a motion to suppress the evidence found in the search of his car, arguing it was obtained in violation of the Fourth Amendment.  The People argued that the evidence was properly seized pursuant to an inventory search, or alternatively, that the search was supported by probable cause.
The trial court granted the motion to suppress and dismissed the case.
The People, however, appealed the ruling to the Fourth Appellate Court of Appeal, which affirmed the trial court.  It found that while the traffic stop was proper, the subsequent search of the vehicle was not an inventory search, not one incident to an arrest and not one supported by probable cause.
The appellate court found that the police officer’s repeated questions to Lee about what was inside the vehicle showed that his search was not to inventory the vehicle, but to investigate it for evidence of a crime (not to inventory it or serve a community caretaking function to clear it for dangerous items).  The fact that the officer never filled out the inventory form or assist the other officer in inventorying the car showed that the search was investigatory.
The appellate court further found that probable cause to search the car was lacking because having a small, legal quantity of marijuana and $100 to $200 in his pocket did not provide probable cause to search the vehicle.
With the legalization of adult use of marijuana with the passage of Prop 64 in November of 2016 (now over three years ago), we are surprised to see cases like this where a district attorney will state that there was probable cause to search the car.  However, we believe this same reasoning, although faulty, will continue for years into the future.
The citation for the Fourth Appellate District Court ruling discussed above is People v. Brandon Lance Lee (4th App. Dist., 2019) 40 Cal.App.5th 853.
For more information about the automobile exception to a warrant and probable cause to search in general, please click on the following articles:
Contact us.
Serving Torrance, Long Beach, Compton, Airport Courthouses and Other Courthouses.