Home
Other Information
Criminal Defense Articles
What Is an Inventory Search? When Is It Allowed?

What Is an Inventory Search? When Is It Allowed?

The Reader’s Digest Version:  An inventory search is a warrantless search,  officially to record the contents of a car when police take custody of it to record what items were in it to protect the vehicle owner’s property and to guard against police planting evidence.  Such a search often discovers controlled substances, ammunition, stolen property, etc., and when this happens, the evidence may be admissilbe if the search was conducted along normal police department guidelines and was not just a fishing expedition.

Sometimes, most often in the context of a vehicle search, police take custody of a suspect’s vehicle and have it impounded.  The vehicle may be blocking traffic, parked in a desolate area where it could be broken into or stolen or damaged in some way.  A tow truck will be requested and the vehicle will be moved from the roadside to a tow lot for the owner to pick up later.
When this happens, law enforcement may inspect and inventory the contents of the car to protect the owner from police planting evidence, from the tow lot from planting evidence and/or to memorialize what was in the car so that when the car is retrieved later, the owner can verify nothing is lost. Florida v. Wells (1990) 495 U.S. 1, 4.
Such a search of the vehicle is call an inventory search and it is permitted without a warrant.  This exception to the Fourth Amendment in furtherance of law enforcement’s “community caretaking purpose, such as promoting public safety or the efficient flow of traffic.” United States v. Torres (9th Cir., 2016) 828 F.3d 1113, 1118.
In other words, the purpose of the search “must be non-investigative;” it must be “conducted on the basis of something other than suspicion of evidence of criminal activity.” (emphasis added) Torres, supra, at 1118.  The search cannot be a “ruse for a general rummaging in order to discover incriminating evidence.”  Wells, supra, at 4. 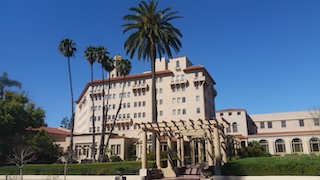 U.S. Ninth Circuit Court of Appeals Pasadena
These general principals were put to the test in the case of Mark Patrick Johnson, an Oregon case, but determined under federal law and therefore, applicable to California.
In April, 2014, police located him and decided to pull him over for an outstanding warrant.  They stopped him by boxing in his car.  One officer approached him from behind while another approached him from the side, effectively blocking his ability to drive away.  The three cars then came to a stop within feet of each other.  Johnson came to a full stop in a lane of travel, disrupting the flow of passing cars.
The officers arrested Johnson on outstanding warrant.  Incident to the arrest, the officers then searched Johnson and found a folding knife in his pocket, as well as $7,100 in $20 and $100 denominations.
Because Johnson’s car was blocking the road and because he could not tell the police who owned the car (leaving police to suspect it was stolen), the officers ordered it towed and impounded.  Prior to the tow, the officers conducted an inventory search of the car.  They found a combination stun gun and flashlight, a glass pipe with white residue and two cellphones in the interior of the car.  In the trunk, the officers found a backpack and a duffel bag.
The officers did not open the duffel bag or the backpack.  Instead, they got a warrant and then opened up the items, finding two bags of methamphetamine, drug-packaging materials, syringes and a digital scale.
Johnson was then indicted on charges of possession with intent to sell methamphetamine in violation of 21 U.S.C. §§ 841(a)(1) and 841(b)(1)(A)(viii).
Before trial, Johnson moved to suppress the evidence found in the car and on his person.  The district court denied the motion and Johnson appealed to the United States Court of Appeals for the Ninth Circuit.
In United States v. Mark Patrick Johnson (2018 DJDAR 4478), it reversed the trial court, finding that the officers’ search of the trunk was based on an individualized suspicion of Johnson.  The court of appeals strongly hinted that the police mistakenly justified their entire search on inventory grounds, when the search instead could have been found proper on other grounds.
The citation for the U.S. Ninth Circuit Court of Appeals ruling discussed above is United States v. Mark Patrick Johnson (9th Cir., 2018) 889 F.3d 1120.
For more information about inventory searches, please click on the following articles:
Contact us.
Serving Torrance, Long Beach, Compton, Airport Courthouses and Other Courthouses.