Home
Other Information
Criminal Defense Articles
Is it Enough to Object that Sentence Greater Than Necessary?

Is it Enough to Object that Sentence Greater Than Necessary?

There is a common worry that when one objects, it must be done in some predetermined way.  Generally speaking, however, one really just needs to communicate to the judge that one is objecting and the grounds for the objection.  There is nothing more required.
This fundamental principal was reaffirmed recently by the U.S. Supreme Court in its ruling February 26, 2020 in Gonzalo Holguin-Hernandez v. United States (2020 DJDAR 1557) after the Fifth Circuit Court of Appeals held that Holguin-Hernandez had forfeited his right to object to the length of his sentence by not making a proper objection.

Why This Article Matters: If one seeks to preserve the sentence length as an issue for appeal, one need only state on the record that defendant objects to the length of the sentence or the terms of the sentence as being unreasonable and therefore improper or imposed in error.  No special words need be uttered in particular and the objection need not be asserted always after the sentenced is imposed.  The key is to bring the issue up to judge’s attention.

Holguin-Hernandez was convicted of drug trafficking and sentenced to 60 months in prison, plus five years of supervised release.  At the time of his conviction, he was also serving a term of supervised release related to an earlier crime.
The prosecutor asked the judge to find that Holguin-Hernandez had violated the terms of that earlier term, to revoke it, and to impose an additional consecutive prison term of 12 to 18 months consistent with federal Sentencing Guidelines (18 U.S.C. § 3553).
Holguin-Hernandez’s counsel argued that there “would be no reason under 18 U.S.C. § 3553 that an additional consecutive sentence would get Holguin-Hernandez’s attention any better than” the five years in federal prison the court had already imposed for the current trafficking offense.  She added that Holguin-Hernandez understood that if he offended again, he was “going to serve his life in prison.”  She then urged the judge to impose “no additional time or certainly less than the Guidelines.”  At the least, she said, the judge should “depart” from the Guidelines, imposing a sentence “below” the applicable range “because it is a substantial sentence and to me over represents the role that he played in” the underlying offense. 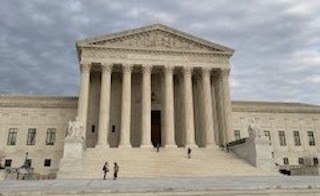 U.S. Supreme Court
The judge then imposed a consecutive term of twelve months, a sentence at the bottom of, but not below the Guidelines range.  The judge asked counsel for Holguin-Hernandez if there was anything further and counsel said no.
Holguin-Hernandez then appealed, arguing that the 12-month sentence was unreasonably long in that it was “greater than necessary” to accomplish the goals of sentencing.  Kimbrough v. United States (2007) 552 U.S. 85, 101 (quoting 18 U.S.C. § 3553(a); see also, e.g. Gall v. United States (2007) 552 U.S. 38, 49-50).
The Court of Appeals held that Holguin-Hernandez forfeited this argument by failing to “object in the district court to the reasonableness of the sentence imposed” after it was imposed.
Holguin-Hernandez then appealed filed a petition for writ of certiorari to the United States Supreme Court.  Because the Supreme Court recognized a split among the circuits on this issue, it granted review.
The U.S. Supreme Court, Justice Alito writing (and with Justice Gorsuch concurring), agreed with Holguin-Hernandez that “a defendant who requests a specific sentence during a sentencing hearing need not object to the sentence after its pronouncement in order to preserve a challenge to its substantive reasonableness (i.e. length) on appeal.”
The U.S. Supreme Court emphasized that it was not deciding “what is sufficient to preserve a claim that a trial court used improper procedures in arriving at its chosen sentence.”  That question was not, the court thought, before it.  Second, the U.S. Supreme Court made it clear that it was not deciding what is sufficient to preserve any “particular” substantive-reasonableness argument.  The question is simply whether the claimed error was brought to the court’s attention.
The only requirement, as the court saw it, was whether the error “was brought to the court’s attention.”  Federal Rule of Criminal Procedure, Rule 52(b); see also, e.g., United States v. Vonner (2008) 516 F.3d 382, 392 (CA6) (en banc) (“While we do not require defendants to challenge the ‘reasonableness” of their sentence in front of the district court, we surely should apply plain-error review to any arguments for leniency that the defendant does not present to the trial court”).
The Supreme Court then remanded the case to the Fifth Circuit to decide whether the sentence was substantially reasonable.
We present this case summary to emphasize the need to simply speak up and let the judge know that one does not agree with the judge’s decision.  No exact formula for objecting is required, but silence is not sufficient.
The citation for the U.S. Supreme Court ruling discussed above is Gonzalo Holguin-Hernandez v. United States (2020) 589 U.S. ___.
For more information about Eighth Amendment issues, please click on the following articles:
Contact us.
Serving Torrance, Long Beach, Compton, Airport Courthouses and Other Courthouses.