Sometimes, justice truly does seem blind.  Lady Liberty, blindfolded and holding the scales of justice, still exists, even for a prison guard accused of crimes against prisoners.  Chino prison guard Robert McGowan was sentenced to four years and three months in prison for violations of federal laws prohibiting a prison guard from depriving an inmate of his constitutional right to be free of cruel and unusual punishment.

Summary in 25 Words or Less:  Prison guard’s sentence vacated when sentencing court relies upon hearsay from an inmate who was not made available in court for cross-examination.

The conduct at issue was a 2007 incident where McGowan allegedly pushed two hand-cuffed and shackled prisoners out of a truck, causing them to suffer bruises and cuts.  The push was apparently in retaliation for an earlier incident when inmates fought with prison guards in a chow hall. 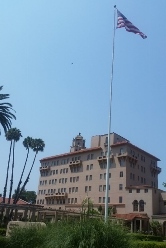 U.S. Ninth Circuit Court of Appeal Pasadena
At the sentencing hearing, the U.S. Attorney’s office argued that McGowan deserved a high term because he had also been accused of using methamphetamine with prisoners and smuggling in drugs for inmates at Chino.  These arguments were based upon the claims made by another inmate who claimed to have seen such conduct by McGowan.  However, the inmate did not testify at the sentencing hearing and, once McGowan was sentenced to 51 months in prison, McGowan appealed the sentence.
In McGowan’s appeal (U.S. v. McGowan, 2011 DJDAR 1072), McGowan argued that the inmate’s claims of drug use and smuggling were false or unreliable and were the basis for the sentence.   McGowan pointed out that since the inmate never appeared in McGowan’s court for cross-examination (the inmate did submit to an FBI interview and did appear in another trial), the sentencing judge never had the chance to weigh the credibility of his claims by observing the inmate.  Moreover, McGowan argued, the inmate had little to lose by implicating McGowan.

The Ninth U.S. Circuit Court of Appeals, with Stephen Reinhardt writing, agreed.  The Court found the allegations sufficiently unreliable and that the allegations were clearly a factor in McGowan’s sentence, as it appeared that the district judge did rely upon the inmate’s allegations in imposing the sentence.

The case was interesting from the beginning.  After the allegations of abuse were made, state officials refused to prosecute McGowan.  The U.S. Attorney’s office then, apparently in response to well-publicized criticism by inmate advocacy groups, took over the case and filed both civil rights and conspiracy charges against McGowan.

The case was tried before U.S. District Judge Manuel Real, then age 88, who has himself been the target of multiple formal reprimands for his conduct on the bench.  McGowan was then found guilty, which was something of a victory over the “code of silence” that renders mute any accuser of police misconduct as well as the “disturbing ease and frequency with which jailhouse informants provide false testimony,” which one case noted.

Judge Real, however, granted McGowan’s post-verdict motion for an acquittal, explaining the case “was at best an assault and battery.”  This seemed to be the end of things.

The acquittal was then appealed by the U.S. Attorney’s Office, perhaps in response to publicity over the acquittal, and Real was reversed.

Sentencing was then assigned to a different judge, who wrongly considered the claims of the absent inmate about McGowan’s use of methamphetamine and drug smuggling.  This was a violation of McGowan’s Sixth Amendment right to face his accuser.  Since the inmate was never present in court, McGowan’s attorney could not cross-examine him to show he lacked or had credibility to his claim that McGowan smuggled in drugs for prisoners at Chino and then used meth with prisoners there.

McGowan then appealed to the U.S. Ninth Circuit Court of Appeals in Pasadena.  The court there vacated the sentence and sent the case back down to the district court (trial court level) for further sentencing, which most likely meant the absent witness who claimed drug smuggling and drug use by McGowan would finally be brought to court to testify in person.

The Ninth Circuit Court of Appeals then vacated the sentence and sent the case back down to the district court (trial court level) for further sentencing.
The citation for the Ninth Circuit, U.S. Court of Appeals, ruling discussed above is U.S. v. Robert McGowan (9th Cir., 2009) 668 F.3d 601.
For more information about sentencing issues, click on the following articles:
Contact Greg Hill & Associates