May a Sentence Enhancement Be Applied Twice for Same Day Act

In the case of People v. Theodore Rolando Wooten (2013 DJDAR 2859), it was alleged that Mr. Wooter forced M.S. to orally copulate him, causing her great bodily injury, and then after M.S. tried to escape, he beat her, quite severely in committing attempted murder.  Mr. Wooten was charged with violating Penal Code §§ 288(a)(c)(2) (forcible oral copulation) and 664 with 187 (attempted murder).  For each charge, the prosecution sought a sentence enhancement for great bodily injury (Penal Code §§ 12022.7 (a) and 12022.8).

The Gist of This Article:  A sentence enhancement can be applied twice to defendant for two crimes even when the two crimes are committed continuously if the criminal intent behind the two crimes is distinguishable.  The following case summary illustrates this situation.

The jury in Yolo County hearing the matter convicted Wooten of both charges and the judge sentenced him to 39 years to life in prison in addition to a determinate term of 17 years and eight months.  The judge imposed the great bodily injury (“GBI”) enhancement to both counts. 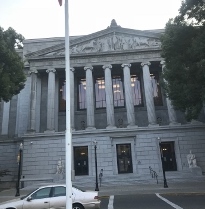 Court of Appeal Third Appellate District Sacramento
Mr. Wooten appealed the sentence to the Third Appellate District, arguing that because the forcible oral copulation and attempted murder involved the same victim, M.S., and both acts occurred without interruption, the great bodily injury enhancement should only be applied once, not twice.  Mr. Wooten cited to Penal Code § 654, which states:

Turning to the facts of Mr. Wooten’s offenses, the Third Appellate acknowledged that Wooten’s crimes seemed to be part of one continuous chain of events.  However, the court distinguished the intent behind the oral copulation as different from that involved with the attempted murder.  There were different criminal intents.

The court pointed out from the record that when Mr. Wooten forced M.S. to orally copulate him, he was motivated by the need for sexual gratification.  Indeed, he first told M.S. to undress and tried to have sex with her, but M.S. squirmed away and would not cooperate.  He allegedly got angry because he failed to penetrate her.  He then hit her a few times and ordered her to perform oral sex on him, which she did.

M.S., however, “got frustrated” and fled from the bathroom.  Wooten wrestled with her and tried to get her back into the bathroom to continue.  M.S. fled again and then Wooten, in tackling her, punched her repeatedly.  He then tried to stab her in the back with a pen and then a spoon.  He then chewed on M.S.’ ears and kicked M.S. in the head at least eight times, causing her head to cut open.  A neighbor then broke into the motel room and Wooten ran away.

In other words, Wooten’s criminal intent first involved sexual gratification and later changed to “sadistic infliction of pain.”  The second attack was intended to punish M.S.

The Third Appellate District consequently denied Wooten’s appeal, holding, that Penal Code § 654 does not bar staying the sentence enhancement on either crime because they involved distinguishable criminal intents on separate attacks.

We think this opinion may encourage prosecutors to “stack enhancements” in their plea bargains as the appellate court here approved.  Indeed, the facts in Wooten’s case are not uncommon.  The disposition of such case will then turn on defense counsel arguing that our client’s intent in the two separate offenses was the same, rather than different.  This paradoxically may lend itself toward helping the prosecution, as we defense attorneys would be conceding similar motives on multiple offenses.  The alternative is to argue distinguishable criminal intent, pointing out that the various crimes cannot be proven at trial.
The citation for the Third Appellate District Court of Appeals ruling discussed above is People v. Theodore Rolando Wooten (3d App. Dist., 2013) 214 Cal.App.4th 121.
For more information about sentence enhancements and double jeopardy, click on the following articles:
Contact Greg Hill & Associates