Under California Penal Code § 290, a person who is convicted of specified sex offenses must register with local police on an annual basis and notify local law enforcement of any change in residence at the time the change is made.  This is a lifetime obligation (to be modified for most 290 registrants by SB 384, effective January 1, 2022).  The person’s name and address is also available for the public to see on the Internet under Megan’s Law.

Thirty years early, in 1980, Hardeman pleaded guilty in California state court to a felony violation of committing lewd and lascivious acts upon a child under the age of 14, a violation of Penal Code § 288.  At that time, California did require Hardeman to register as a sex offender, but only until and if he had the conviction expunged. 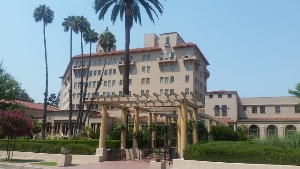 U.S. Ninth Circuit Court of Appeals Pasadena
In 1982, however, the California legislature amended its law concerning the obligation to register as a sex offender, making it a lifetime obligation regardless of expungement.  At the time, Hardeman had not had his conviction expunged yet.  In 1983, however, Hardeman did successfully have his conviction expunged.
In 1994, California amended its law again so that any sex offense conviction-felony or misdemeanor-required continuous registration, regardless of expungement.  This was Penal Code § 290.1 (1994).

In Hardeman’s 2010 case, involving him allegedly traveling to Mexico to have sex with a minor, he successfully moved the lower federal court to dismiss the count against him of violating 18 U.S.C. § 2260A, arguing that it was a violation of the Ex Post Facto Clause of the U.S. Constitution.  This provision prohibits the government from making a law applicable to events that occur before the law was enacted.  A law also violates the Ex Post Facto Clause if it increases the penalty by which a crime is punishable.

The lower court agreed with Hardeman and dismissed the 2260A count.  The government then appealed.

The United States Court of Appeals for the Ninth Circuit, in U.S. v. Gary Hardeman (2013 DJDAR 583) reversed, agreeing with the government.  The court of appeals cited to People v. Fioretti (Ct. App. 1997) 63 Cal. Rptr. 2d 367, 370-71, wherein a California court of appeal held that retroactive application of the sex offender registration laws do not violate the Ex Post Facto Clause. It commented that Fioretti, as well as several other published opinions, had made such a holding because registration was not considered punitive and thus the Ex Post Facto Clause was not applicable.

The Ninth Circuit Court of Appeals further commented that the U.S. Supreme Court “has long held that recidivism statutes do not violate the Ex Post Facto Clause because the enhanced penalty punishes only punishment for the original crimes.”  Rather, the latest crime is considered an aggravated offense because of repetitive conduct that is illegal.

Accordingly, The Court of Appeals reversed the trial court and sent the case back to the trial court to further proceed with the § 2260A count as a charged against Hardeman.
The citation for the Ninth Circuit, U.S. Court of Appeals, ruling discussed above is U.S. v. Gary Hardeman (9th Cir., 2013) 704 F.3d 1266.
For more information about sentencing issues with sex offenses, click on the following articles:
Contact Greg Hill & Associates
Serving Torrance, Long Beach, Compton, Airport Courthouses and Other Courthouses.