Home
Other Information
Criminal Defense Articles
Registration As a Sex Offender Required If Plea Did Not?

Registration As a Sex Offender Required If Plea Did Not?

In 1986, James Maciel was convicted of committing lewd and lascivious acts with force against a child.  He was sentenced to 42 years and four months in state prison.  The sentencing court did not impose a parole term at all and did not require him to register with the state as a sex offender under Penal Code § 290.

The Gist of This Article:  The State may require a person to register as a sex offender under Penal Code even if the plea bargain failed to address this obligation.

At the time, state law required that the judge advise defendant at sentencing that he would be placed on three years of parole upon release from prison (Penal Code § 1170 (c) (1986)), but the judge overlooked telling Maciel this.

Maciel was then released from custody in 2008, at which time the state advised him that he would be placed on three years of parole and subject to a lifetime requirement to register as a sex offender under Penal Code § 290.  Maciel was certainly surprised and upset, but happy to be free after serving just 22 of the 42 years and four months. 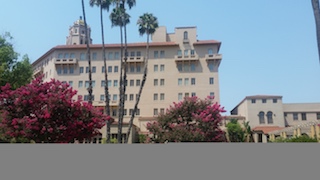 U.S. Ninth Circuit Court of Appeals Pasadena
Eleventh months later, however, Maciel was picked up on a parole violation and remanded back to state prison.
Maciel then filed a petition for a writ of habeas corpus, arguing that the parole and registration requirements were improper because they were not part of his original sentence.  Such conditions violated Hill v. United States ex.rel. Wampler (1936) 298 U.S. 460 by imposing parole terms that were not part of his original judgment.

The state court denied Maciel’s writ of habeas corpus, stating that “a parole period and registration requirements are statutorily mandated, and not subject to amendment by the trial court.”  In other words, the trial court made a mistake, not the state when Maciel was released from prison.

While Maciel’s appeal to the Ninth Circuit was pending, Maciel was released from prison and later, discharged from parole.  Therefore, his appeal focused only on the sex offender registration requirement.

The Ninth Circuit then looked at the Wampler case to see if the lower federal court made a mistake in finding the sex offender registration requirement was legal.

Thomas Wampler was convicted of income tax fraud and sentenced to an 18 month term in a federal penitentiary and a $5,000 fine.  The clerk of the court then added language to the warrant of commitment that Wampler was to remain imprisoned until he paid the fine.

Wampler found out about the added condition and appealed his continued confinement by a writ of habeas corpus.  The case went up to the U.S. Supreme Court, which granted Wampler’s petition on grounds of due process.

Second, Wampler applied to discretionary sentencing terms rather than statutorily mandated requirements.  In Wampler, the clerk merely followed a tradition that the specific judge had and it was not mandated by law.

Maciel argued that the burdens on his liberty were punitive.  He identified mandatory GPS monitoring for life, a lifetime ban on living within 2,000 feet of a school or park where children gather, monthly reporting requirements while he remained homeless and his being identified on the Marsy’s law website with his name, photo, crime and any future address.

In response, the Ninth Circuit Court of Appeals then cited to numerous cases which have considered sex offender requirements as regulatory and not punitive.  In doing so, the court of appeals affirmed the lower federal court, meaning the lifetime sexual offender requirement remained for Mr. Maciel.
The citation for the U.S. Ninth Circuit Court of Appeal ruling discussed above is James D. Maciel v. Matthew L. Cate; J. Flores (9th Cir. 2013) 731 F.3d 928.
For more information about registering as a sex offender under Penal Code § 290, click on the following articles:
Contact Greg Hill & Associates