Most people are familiar with videos of defendants attacking the judge in open court or punching the prosecutor or the defense attorney, or in one remarkable video, an inmate runs out of the courtroom, making an escape attempt from the courthouse.
The stress of a criminal proceeding, the anxiety of expecting testimony that will convict a person and frustration with the legal process in general can lead to violence and danger.  Even a deputy watching defendant closely cannot do much if a defendant suddenly gets up and rushes toward the judge or prosecutor to stab him, strangle or punch him.

The Gist of this Article: The routine policy in federal court of shackling prisoners in court is unconstitutional because it offends principals of “innocent until proven guilty” and erodes confidence in our legal system.

In 2013, the United States District Court for the Southern District of California, the U.S. Marshall Service requested a “a district-wide policy to produce all in-custody defendants in full restraints for most non-jury proceedings.”  “Full restraints” meant that a defendant’s hands were closely handcuffed together and connected by chain to another chain running around the defendant’s waist, and the defendant’s feet are shackled and chained together.
The Marshals supported their request by citing to increasing security threats from what they viewed as changing demographics and increasing caseloads in the district.
After seeking input from the U.S. Attorney’s Office, the Federal Defenders of San Diego and a Criminal Justice Act panel representative, the judges adopted the policy of deferring to the Marshals’ shackling decisions, with a few minor exceptions.  The judges retained discretion to “direct the Marshals to produce an in-custody defendant without restraints.”
Four defendants, Rene Sanchez-Gomez, Moises Patricio-Guzman, Jasmin Isabel Morales and Mark Ring all appeared in court for a nonjury pretrial proceeding in “full restraints” and objected to their use.  The magistrate judges overruled their objections. 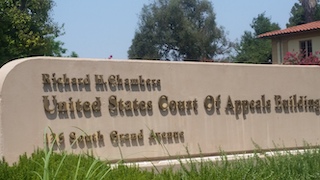 U.S. Ninth Circuit Court of Appeals Pasadena
Defendants appealed these denials to the district court and also filed “emergency motions” challenging the constitutionality of the district-wide policy.  The district court denied all relief.
All four case were consolidated and presented to the United States Court of Appeals for the Ninth Circuit in Pasadena.
The Ninth Circuit ruled that such a policy is unconstitutional, as well as the decisions on the individual defendants presented.
The Ninth Circuit began its analysis by reminding that “at the heart of our criminal justice system is the well-worn phrase, innocent until proven guilty.  See Taylor v. Kentucky (1978) 436 U.S. 478, 483.  In that context, the court further reminds us that “we must guard against any gradual erosion of the principle it represents, whether in practice or appearance.  This principle safeguards our most basic constitutional liberties, including the right to be free from unwarranted restraints.”  See Deck v. Missouri (2005) 544 U.S. 622, 629-630.
In Deck, the U.S. Supreme Court held that “the Constitution forbids the use of visible shackles during the penalty phase, as it forbids their use during the guilt phase, unless that use ‘is justified by an essential state interest’ – such as the interest in courtroom security – specific to the defendant on trial.”  Id., at 624 (quoting Holbrook v. Flynn (1986) 475 U.S. 560, 568-69.
In evaluating the government’s justification, a court may “take into account the factors that courts have traditionally relied on in gauging potential security problems and the risk of escape at trial.”  Id., at 629.
Moreover, when restraints are used on all prisoners, the public loses confidence in the integrity of court proceedings insofar as the presumption of innocence is lost.  Likewise, when a prisoner is fitted with a stun belt, disparate treatment is promoted and courtroom decorum is forced, rather than shown in a dignified manner.  Courts must make an individualized assessment of each prisoner, rather than adopt a blanket policy.  Requiring each defendant to wear full restraints make every defendant appear threatening or violent, which is inconsistent with the individualized assessment our justice system is based upon.  Consequently, the policy offends notions of judicial integrity, a presumption of innocence and due process.  Thus, the blanket shackling practice is unconstitutional, the Ninth Circuit ruled.
A great deal of the Ninth Circuit opinion addressed whether it could hear the consolidated claims of all four defendants and, if so, under what authority.  This case summary will not address such issues.
The citation for the Ninth Circuit, U.S. Court of Appeals ruling discussed above is United States v. Rene Sanchez-Gomez (9th Cir., 2017) 859 F.3d 649.
For more information about shackling and defendant’s rights in the courtroom, please click on the following articles:
Contact us.
Serving Torrance, Long Beach, Compton, Airport Courthouses and Other Courthouses.