Is the same principal applicable in a criminal action for restitution?  At a restitution hearing, may defendant reduce the damages he or she must pay because the victim contributed to the his own injuries in some way?

The restitution order in People v. Melissa Nicole Nicholas put this to the test.

Ms. Nicholas had an “on-again, off-again” relationship with her boyfriend.  She went over to a girlfriend’s apartment and began discussing her boyfriend with her girlfriends.  While she was there, she drank three 24-ounce cans of beer.  She was part way through her fourth can at 7:15 p.m.

At about 7:30 p.m., she decided to go to a bar with her girlfriends.  Beer was expensive at the bar, so the friends agreed to buy two or three cans of beer on the way and drink the beer on the way to the bar. 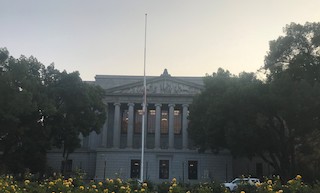 Court of Appeal Third Appellate District Sacramento
While driving to the bar, Ms. Nicholas saw her “on-again, off-again” boyfriend on his new motorcycle, which he had purchased to impress his new girlfriend.  The girls saw the boyfriend “fly” by them and Nicholas sped to catch up.

She caught up to her boyfriend at a traffic light and had a brief angry conversation with her boyfriend.  A motorist behind them at the light watched this.

The light turned green and the boyfriend again raced ahead.  Ms. Nicholas also sped off.  The witness behind them lost sight of the two, but after rounding a curve in the road, came upon a lot of dust in the air and the boyfriend laying on the road “quite a way up the road.”  The witness, who was a nurse, determined he had already died.

The witness then walked up to Nicholas’ car and saw Ms. Nicholas and her friend still sitting in the car with the boyfriend’s detached leg inside the car.  Ms. Nicholas’ friend suffered a shattered eye socket and cheek bone, as well as a wrist injury.  She was in the hospital for eight days.

The judge sentenced her to two years in state prison and to pay restitution to her boyfriend’s mother in the amount of $14,635.33.

The prosecutor argued that civil jury instructions were inapplicable in a criminal restitution hearing and that Millard did not apply because surviving family members do not “step into the shoes” of a victim, insofar as they did nothing wrong.  They are separate victims.

The trial court ruled that comparative negligence did not apply to restitution in this case, but had the boyfriend survived, it would have.

Nicholas appealed the ruling to the Third Appellate District, which in People v. Melissa Nicole Nicholas (2017 DJDAR 1195), affirmed the trial court.  The appellate court agreed with the prosecution and trial court that Millard did not apply because the mother of the boyfriend here was a separate victim.  She contributed in no way to the accident and was not negligent and thus, she should not be penalized for her son’s negligence, if any.
The citation for the Third Appellate District Court ruling discussed above is People v. Melissa Nicole Nicholas (3d App. Dist., 2017) 8 Cal.App.5th 330.
For more information about issues involving restitution, please click on the following articles:
Contact us.