Our client, a Navy veteran but still just 30, was with his much younger friends going to a marijuana dispensary after work.  Two of the friends were admitted gang members and one was a suspected gang member.  Our client was not a gang member in any way, but he grew up in an area dominated by gangs, so he knew many gang members, including some as friends.

On the way to the dispensary, they planned to drop off one of the guys at home.

However, for one reason or another, they became lost and strayed into the neighborhoods claimed by another rival gang.

According to the alleged victim, the car with our client inside (in the rear left seat) pulled alongside the victim, who was walking along the sidewalk.  It was a residential street and about 9:00 p.m.  The driver allegedly asked the pedestrian, “where you from?”  As the reader may be aware, this is a common (perhaps the most common) gang challenge to another.

Before the alleged victim could respond in any way, a handgun emerged from the front seat drivers rolled-down window and several shots were fired.  None of the shots hit the target, who dropped to the ground.  When the shots stopped, the victim ran up a home’s driveway and hid between trash cans.  While hiding, he called his wife using his cell phone.

According to the victim, someone from the car got out and chased the victim, but was unsuccessful in finding him.

At the same time, a LAPD squad car was driving about a half-block away and heard the shots.  It pulled over the first car it saw, which had our client inside.

This was, according to the police officer, twenty seconds after hearing the shots.  The traffic stop was made because the car allegedly had illegally tinted windows.

The traffic stop appeared to our client to be an uneventful minor traffic stop.  The officers were not under stress or, it appeared, suspecting our client and his friends were related to the shots.

However, as the officers were talking to the driver, a lady ran up to the police officers and screamed that the occupants of the car just tried to shoot her husband.  She related that her husband had called her on his cell phone to tell her this. 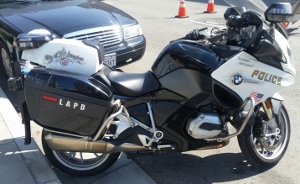 The officers then performed a wax paraffin gunshot residue (GSR) test on the driver’s hands and then took into evidence several items of clothing found in the car.

Police later x-rayed the car, but found no gun.  The next day, they scoured the area in daylight and found no bullet holes anywhere.

Once at the station, but not until almost two hours passed, the police did GSR tests on our client and the other two passengers.  The GSR count on the driver’s hands was zero, as was the GSR results for the back-seat right-side passenger.

However, our client’s hands returned a very low positive GSR measurement, as did the front-right seat passenger’s hands.  Our client, however, worked in a warehouse where he handled cardboard products all day long.  A common false positive for GSR it caused by extensive exposure to cardboard products.

The client and his friends were all arrested and charged with assault with a deadly weapon, a firearm, Penal Code § 245(a)(2).  Each defendant was charged with a ten-year sentencing enhancement for the crime being in furtherance of a criminal street gang (Penal Code § 186.22(b)(1)(C)).  Two of the other defendants had prior strike convictions, making the sentence subject to doubling in length.  The driver, the alleged shooter, also faced a gun enhancement under Penal Code § 12022.5(a) of 3, 4 or ten years in state prison.

All four defendants posted bail except one, who remained in custody.  He also faced a probation violation.  The case slowly worked its way through the system, taking over a year.

Along the way, a DNA expert was retained, as well as a GSR and a gang expert.  There were multiple retesting of the evidence and wax samples.

It went through a preliminary hearing and was dismissed when the alleged victim failed to show.  It was then refiled and stipulated to simply be set for trial.

On day one of trial, however, the prosecution was forced to announce it was unable to proceed when the alleged victim failed to appear.  Much to our client’s pleasure, the case was then dismissed.

For more information about assault with a deadly weapon issues, please click on the following articles:
Contact us.
Serving Torrance, Long Beach, Compton, Airport Courthouses and Other Courthouses.