Our client, age 23, was at Anarchy Library, a Downey bar off Woodruff Avenue.  It was a Sunday night in January.  Our client felt cold, even inside the bar, so he walked out of the bar to his car to get his jacket.  It was about 0:45 a.m.
Once out in the parking lot, after putting on his jacket, he felt the need to urinate.  He looked around and noticed no one else in the parking lot.
He therefore urinated between his car and another car.
Just as he was finishing, a Downy police car pulled up and observed our client urinating.  The officer stopped his car and exited.  He asked our client if he knew urinating in public was against the law and our client sheepishly admitted that he knew this.
The police officer then handed our client a ticket for a misdemeanor violation of Downey Municipal Code § 4115.  The client signed the ticket with a promise to appear in the Downey Superior Court in about three months.  He then went back in the Anarchy Library, somewhat stunned by receiving the ticket.
A few days later, the full weight of reality had landed on our client and he called Greg Hill & Associates.  The client had read on the Internet that a conviction for public urination could result in a requirement to register as a sex offender for life.  He had also read that such a crime, as a misdemeanor, could be punished by up to six months in county jail and / or a $1,000 fine.
Greg discussed the facts of the case with the client and how such tickets were often resolved.  The client expressed anxiety about losing his job, which was working as a Los Angeles County employee as a clerk in the Post-Anesthetic Care Unit at the Harbor-UCLA Medical Center.  He also was a nursing student at Cerritos College, where he had excelled academically and earned distinction by being selected on the Dean’s List and the President’s List there. 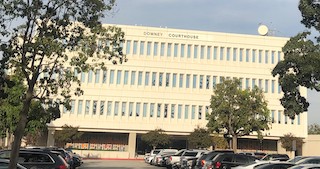 Downey Courthouse
Greg explained that the client would not be required to register as a sex offender because such urination was not done in a way to offend or shock others or to achieve any type of sexual gratification.  Greg explained that, in the past, he had success reducing the case from a misdemeanor to an infraction if the client attended ten Alcoholics Anonymous (AA) meetings before the arraignment.
The client then retained Greg Hill & Associates and attended ten AA meetings prior to the arraignment.  He provided Greg with his AA sign-in sheet to take to court for the arraignment.
Greg then appeared at the arraignment with the AA sign-in sheet and, as in prior cases, once he showed this to the Downey City Prosecutor, he kindly agreed to amend the complaint to allege a violation of Downey Municipal Code § 4115 as an infraction.  On the client’s behalf, Greg then entered a no contest plea to the infraction.  The client had to pay a $10 court fine, which with penalties and assessments totaled $145.
The client paid this fee immediately and then had to wait one year before he was eligible for expungement of the infraction under Penal Code § 1203.4a(a).  Greg contacted the client one month prior to the one-year mark, asking the client if he was interested in expungement of the conviction.
The client responded that he was interested in having the infraction expunged and retained Greg Hill & Associates to file the appropriate petition for dismissal (expungement).
Greg explained that since a conviction for an infraction does not involve probation, to have the conviction expunged, the petitioner (our client) had to prove to the court, under 1203.4a(a), that he had “lived an honest and upright life” and obeyed all laws, similar to being on probation.
Greg Hill & Associates then prepared a declaration for the client to sign about his leading an honest and upright life by working full time at Harbor UCLA Medical Center, attending and excelling at Cerritos College in the nursing program and obeying all laws.
Greg Hill & Associates then filed the petition for dismissal, with not just the FL-180 judicial council form, but a short points and authorities with a declaration for the client about leading an honest and upright life.  Greg Hill & Associates also paid the filing fee for the expungement at the Downey Superior Court.
The judge assigned to the case granted the petition for dismissal, signing the order, which our office then provided to the client.  The client was extremely happy with this closure of his case.
For more information about expungement of an infraction, please click on the following articles:
Contact us.
Serving Torrance, Long Beach, Compton, Airport Courthouses and Other Courthouses.