In Determining Value for PC 459, Is Sales Tax Included?

Brief Synopsis: In evaluating the value of a stolen item for whether it costs more or less than $950, the threshold for a misdemeanor or a felony under Prop 47, the sales tax on the stolen item is included in the value of the item because the buyer must pay this to lawfully acquire possession, so an item selling for $940 would be valued at over $950 once sales tax is included and would be a felony.

The case arose in July 2014, when Seals walked into Hot Spot Wireless, a cellphone store.  Seals picked up a cell phone and walked out without paying.  A clerk chased after Seals and when the clerk got close, Seals pulled out a nine-inch knife and told the clerk to back away.

The clerk was determined to get the phone back because he had no insurance on it to cover the loss.  The clerk threw rocks at Seals and Seals responded by throwing rocks back.

A jury found seals guilty of both crimes and found true the prior conviction allegations as to five of Seals’ prior convictions.  The judge sentenced Seals to state prison for a total term of 35 years to life (he had two prior strike offenses). 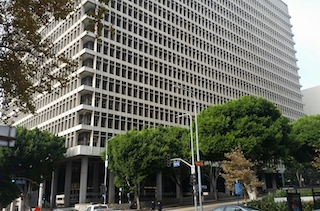 Clara Shortridge Foltz Criminal Court Building LA
Seals appealed the verdict to the Second Appellate District because the store owner testified that the phone sold for $899, meaning it was less than the $950 minimum required to be felony commercial burglary (Penal Code § 459) and not misdemeanor shoplifting, Penal Code § 459.5.  It is important to note that with tax, the price of the phone was almost $1,000.  If the jury improperly considered sales tax as part of the value, the sentence would be considerably less than 35 years to life.

The Second Appellate District began its analysis by reviewing Proposition 47’s provisions that added Penal Code § 459.5, creating a separate offense called shoplifting, as a misdemeanor.  It defined the offense as “entering a commercial establishment with intent to commit larceny while that establishment is open during regular business hours, where the value of the property that is taken or intended to be taken does not exceed $950.”

To establish a violation of Penal Code § 459, in contrast, which is a felony, the People were required to prove the property Seals stole had a value exceeding $950.  At trial, the cell phone store manager testified that he usually sold the phone for $899, which with tax, was “nine-fifty, almost $1,000.”  There was no evidence that, excluding sales tax, the store sold the phone for over $950.

Under Penal Code § 484(a), in defining theft, value is defined as “the reasonable and fair market value test to be used for theft crimes that contained a value threshold…”  People v. Romanowski (2017) 2 Cal 5th 903, 914 [Prop 47 did not change this valuation approach].

In Xerox Corp v. County of Orange (1977) 66 Cal. App. 3d 746, county assessors included sales tax in valuing property at the fair market value.  The property was copying machines and related equipment that Xerox leased to its customers.  Xerox argued that including sales tax and freight charges was improper.

In the Seals case, consequently, the Second Appellate District for the Court of Appeals found that the judge did not err in including the sales tax in calculating value of the cell phone stolen by Seals.  Thus, his conviction for felony second-degree commercial burglary was upheld, which had huge sentencing consequences by not being a misdemeanor.
The citation for the Second Appellate District Court ruling discussed above is People v. Troy Earl Seals (2d App. Dist., 2017) 14 Cal.App.5th 1210, 222 Cal. Rptr. 3d 589.
For more information about Prop 47 Issues, please click on the following articles:
Contact us.