Home
Other Information
Criminal Defense Articles
Can a Prosecutor Reinstate Charges If I Seek Prop 47 Relief?

Can a Prosecutor Reinstate Charges If I Seek Prop 47 Relief?

Proposition 47 is seen as a windfall for defendants with certain felony convictions, allowing such felons to petition a court to resentence the charge to a misdemeanor.  It is that simple.

Or is it?  The following case summary explains why it may not be a good idea, even if one is eligible for Prop 47 relief, to seek it.

In early 2013, Francisco Pascual Diego was walking down a downtown Los Angeles street when a person, later identified as Morris Glen Harris, Jr., came up behind him and hit him in the face.  Diego fell to the ground and Harris stole his cell phone.  Diego got up and chased Harris, eventually flagging down two police officers, who then arrested Harris and returned the cell phone to Diego.

The Los Angeles District Attorney’s office filed a felony complaint against Harris for violating Penal Code § 211, robbery.  Robbery is a serious and violent felony.  It is a “strike” offense within the meaning of the Three Strikes Law.  The information alleged that Harris had six prior felony convictions, including a prior conviction for robbery, which made the present offense a second strike.

This meant any sentence he might face would be presumptively doubled in length.  With enhancements for his other prison priors, he faced a maximum of fifteen years in state prison if convicted. 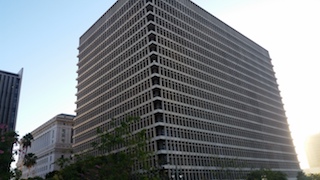 Clara Shortridge Foltz Criminal Courts Building - Los Angeles
During the course of plea bargaining in the case, Harris resolved the case with a plea bargain to one count of grand theft (Penal Code § 487(c)), which is not a strike.  As part of the plea bargain, he admitted his prior strike, so he was given pre-sentencing credit for time served at one fifth of the time served (Penal Code § 1170.12(a)(5)).  He was then sentenced to six years in state prison and would be required to serve a minimum of 80% of this time.  This plea was entered into in April, 2013.
On November 4, 2014, voters here in California passed Proposition 47.  Under its provisions, a number of specified felony offenses were redefined as misdemeanors, including theft of property valued at less than $950.  Under Prop 47, at Penal Code § 1170.18(a), a person who is eligible for resentencing may petition the court that originally sentenced him.  The court cannot sua sponte (on its own) resentence someone who does not proactively seek it.

Harris then filed his petition for resentencing under § 1170.18 on January 15, 2015, seeking to have his grand theft conviction reclassified as a misdemeanor.

Taking into account his pre-sentencing credit and his time served, he already had served over two years of the six year sentence.  This meant that if his petition were granted, he would be released from prison.

The District Attorney’s office responded to the petition by filing a motion to withdraw the plea bargain and reinstate the original charges.  The People argued that while Harris was entitled to reclassification of his conviction, if this were done, it would deny the People of the benefit of the plea bargain it negotiated.  This meant that the People wished to withdraw the plea agreement.

The trial court then granted both the petition of Harris and the People’s motion.  This seemed quite confusing and so Harris filed a petition for mandate to the Second Appellate Division, seeking review of the trial court’s order allowing the People to withdraw from the plea bargain and reinstate the original charges.

The Second Appellate Division then defended its decision.  It cited to People v. Collins (1978) 21 Cal.3d 208, which addressed the question of what happens to a plea bargain when a change in the law deprives either the defendant or the People of the benefit of the bargain in the plea agreement.  In Collins, defendant was charged with fifteen felony counts and pled to one count of non-forcible oral copulation in exchange for a dismissal of the other fourteen counts.  Before judgement was entered, the Legislature decriminalized non-forcible oral copulation.

The People then moved to set aside the plea agreement and restore the dismissed counts.  This was because the change in the law “destroyed a fundamental assumption underlying the plea bargain – that defendant would be vulnerable to a term of imprisonment, thus depriving the People of the benefit of the bargain.

Thus, in Harris’ case here, the appellate court cited to Collins.  It explained that the six year prison sentence agreed to by Harris was a fundamental assumption of the plea bargain.  The prison term was a material and negotiated terms.  To wipe away the prison term would give Harris “a bounty in excess of that to which he is entitled.”  Collins, p. 215.

Consequently, the People’s motion to reinstate charges was affirmed.  We look at this ruling with great interest, as we also have clients who attempt to “get greedy,” not knowing that the People may seek to withdraw the plea.  The cliché of “pick your battles” is prudent advice here and obviously, Harris’ counsel did not follow this.
The citation for the Second Appellate District Court ruling discussed above is Morris Glen Harris, Jr. v. Superior Court  (2d App. Dist., 2015) 242 Cal.App. 4th 244 (reversed by California Supreme Court in Morris Glen Harris, Jr. v. Superior Court of Los Angeles County (2016) 1 Cal.5th 984.)”
For more information about the issues in this case, please click on the following articles:
Contact us.
Serving Torrance, Long Beach, Compton, Airport Courthouses and Other Courthouses.