Home
Other Information
Criminal Defense Articles
If a Prosecutor Overlooks Facts, Is a Plea Bargain Invalid?

If a Prosecutor Overlooks Facts, Is a Plea Bargain Invalid?

Most criminal defense attorneys will warn clients when discussing a proposed plea bargain offered by the prosecution that the terms of the offer can increase (get worse for the client) if new facts become known.  This could be that the police further investigate the case and discover a new witness favorable to the prosecution or they get a video tape, for example, that clarifies how the crime took place.  In other words, an offer can change when new facts make the old offer unfair to the prosecution.  In fact, new charges can also be filed if supported by the facts.

In a Nutshell:  A prosecutor’s ignorance or misunderstanding of the facts does not allow a judge to nullify or invalidate a plea bargain.  The following summary of a case from Orange County epitomized this principal.

Our experience is that this rarely happens and if it does, most prosecutors do not increase the offer out of respect for the need for closure on a case. 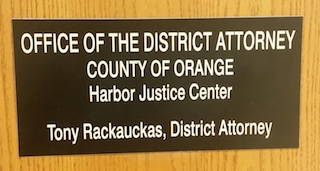 OC DA Office Sign Newport Beach Courthouse Harbor Division
In other words, does the prosecutor’s mistake of fact bar the felony complaint?  After all, the prosecutor was aware of the facts allowing such a felony complaint at the time the misdemeanor plea bargain was offered?  Can the prosecutor do this?
This legal issue came to the Fourth Appellate District Court of Appeal recently in the case of Joseph Semir Mutwakil Amin v. Superior Court (2015 DJDAR 7108).  Mr. Amin was arrested after a customer in an Irvine Albertson’s was bothered by him as he reached under her dress with his cell phone to videotape her.

The Irvine police obtained a DVD from Albertson’s and recognized Amin from a series of other incidents where Amin groped a woman in a park.  The police then went to Amin’s house and asked him about the events.  Amin admitted to filming six other woman using his cell phone and gave his cell phone to police.  He was also suspected of inappropriate touching of a twelve year old girl and of touching another female inappropriately at a local gym.

All of these incidents and suspected incidents were then written into a police report and given to the District Attorney of Orange County.

Amin retained Brian Gurwitz, a very good criminal defense attorney.  Gurwitz received the police report and quickly arranged a plea deal at Amin’s arraignment.  The handling district attorney did not read the police report, but agreed to a plea bargain nonetheless that allowed Amin to be placed on three years of summary probation, required him to attend 52 counseling sessions and registered as a sex offender under Penal Code § 290.  The prosecutor expressly agreed that the plea would resolve “all incidents referenced in the police report, both charged and uncharged.”  Amin seemed to have dodged a bullet!

Not long after Amin was sentenced, police called the prosecutor and told her that police were now able to make a case against Amin on two of the felony incidents described in the police report.  The prosecutor then filed such a felony complaint, alleging two counts of Amin violating Penal Code § 288(b)(1).

A week later, Gurwitz filed a non-statutory motion to dismiss the felony complaint.  The prosecutor said the new complaint was valid because the prior, misdemeanor plea agreement was unenforceable, as it was based on a mistake of facts, as well as because public policy should not permit anyone to avoid prosecution for child molestation.

The trial judge hearing the motion agreed with the prosecution and allowed the felony complaint to continue.  Gurwitz then appealed to the Fourth Appellate District, which reversed, finding in favor of Amin.

As representatives of the government, it is particularly important for prosecutors to live up to any and all promises that persuade a defendant to give up his constitutional right to trial and plead guilty to a criminal offense.

See People v. Mancheno (1982) 32 Cal. 3d 855, 860 [emphasizing due process and the integrity of the plea bargaining system require the state to “keep its word when it offers inducements in exchange for a plea of guilty.”]  The court also noted that, “a heavy workload may well explain [such mistakes], but it does not excuse them. “  Santobello v. New York (1971) 404 U.S. 257, 260 [prosecutor’s innocent mistake insufficient basis to justify government’s breach of plea agreement].

Here, both parties knew the police report referenced various alleged incidents of other serious criminal conduct by Amin.  The Fourth Appellate District therefore found that the prosecutor did not so much commit or have a mistake of fact defense as she simply made a poor decision.  She did not read the police report carefully enough before entering into the plea bargain.  She had the choice to decline the deal until she had more knowledge or to act in conscious ignorance to get an agreement.  “The law requires her to bear the risk of her mistake.”