Penal Code § 530.5 prohibits using the identity of another person for unlawful and fraudulent purposes.  The use may be in opening up a credit card line of credit (and then obtaining goods or services unlawfully) or in using the identity to obtain a driver’s license.  A violation of Penal Code § 530.5 is a wobbler, meaning it can be charged as a felony or a misdemeanor, depending upon the facts and the person’s criminal history.

Brief Synopsis: A person who commits identity theft is usually ordered to pay restitution to the victim, i.e., for a credit card bill created by the thief, but the thief is often unable to pay anything back and the victim is then hounded by the credit card company.  The CITA, discussed in this article, may offer some protection to the victim. 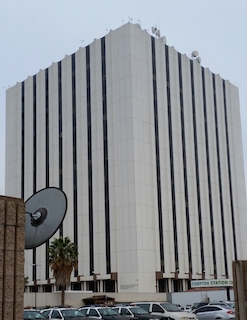 Compton Courthouse
However, sometimes the credit card company will not do this. When this happens, the victim is often frustrated and angry. Under CITA, “a person may bring an action against a claimant to establish that the person is a victim of identity theft in connection with claimants claims against a person.”  Civil Code § 1798.93(a); Peters v. Discover Bank (9th Cir. 2016) 649 Fed. Appx. 405.
Before doing this, however, the victim must send a copy of the police report to the entity that is attempting to collect the fraudulent debt. Satey v. JP-Morgan Chase & Co. (9th Cir. 2008) 521 F.3d 1087, 1092, citing Cal. Civ. Code § 1798.93(a)(6)(A).  If, and only if, collection activity continues after the thirty-day period, the consumer may then bring a lawsuit.
The credit card companies can be tough on responding, as they have learned over time that many consumers will claim identity theft to avoid legitimate debts.  They may be skeptical, so if the thief was convicted, a copy of the docket report showing the conviction certainly helps.
Some credit card companies and debt collectors require an FTC Identity Theft Affidavit to substantiate identity theft claims.  To fill one out, go to https://www.identitytheft.gov/.  The credit card companies also usually require your driver’s license and social security card.  The credit card company will also want to see your signature to compare it to the credit card application.  Try to show the credit card company five or six authentic signatures from various documents you have signed.  Providing this will allow the collection agency to compare your signature with the one on the credit card application to detect a forgery.
If one is successful in suing the credit card company or collection agency(ies), one may recover attorneys’ fees, costs and an order that the debt be forgiven.  In addition, a consumer can also recover up to $30,000 in the form of a civil penalty against the claimant.  See Cutler ex rel. Jay v. Sallie Mae, Inc. 2015 LEXIS 58157 at 20 (C.D. Cal. 2015), citing Toroussian v. Asset Acceptance, LLC, 2013 U.S. Dist. LEXIS 145007, at 3 (C.D. Cal. 2013).
For more information about identity theft, please click on the following articles:
Contact us.
Serving Torrance, Long Beach, Compton, Airport Courthouses and Other Courthouses.