Home
Other Information
Criminal Defense Articles
What Is Identity Theft? The Defenses? Punishment?

What Is Identity Theft? The Defenses? Punishment?

Identity theft is increasingly common crime with the advance of banking by computer and online purchasing.  However, identity theft is not limited to activities using the Internet.

What to Take Away:  Identity theft is taking and using some else’s identifying information, i.e. social security number, date of birth, driver’s license number, etc., without their consent, to use for any unlawful purpose, which does not necessarily have to be theft.

It is broadly defined as willfully obtaining and then using another person’s identifying information with the specific intent to further any unlawful end or in any fraudulent manner.  It can be something as simple as signing someone else’s name on a check to allow a transfer of funds (which would also be forgery).  It can even include giving a false name to a police officer so as to escape criminal liability for oneself (which can also be a separate offense itself).  Such offenses are committed without the victim’s consent or permission.
“Willfully” means intentionally.  It suggests a purposeful manner and having a goal in mind while, here, obtaining the information and then using it.  Doing so by accident is a defense, but this can be problematic (as more than a few of our clients have found out), as it certainly raises the question of why the suspect has such information at all and did the owner of such identifying information provide this to the suspect. 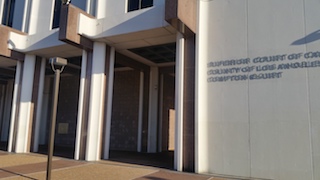 Compton Courthouse
“Any unlawful or fraudulent manner” includes transfers of property, online purchases using a bank ATM card or credit card, receiving services or accessing one’s medical information.
A “person” is broadly defined under the identify theft provisions to include a living person, a deceased person, a corporation, limited liability company, an association, partnership, a public entity or organization.
“Personal identifying information” includes, but is not limited to, one’s name, address, telephone number, date of birth, social security number, mother’s maiden name, driver’s license number, professional or business license number, health insurance number, employee identification number, checking account number, PIN, savings account number, credit card number, or information on a birth or death certificate.
Fraud requires that someone do something that causes damage to another person.  This does not have to be financial harm, although it is commonly associated with fraud.  The damage can also be embarrassment, anxiety or significant inconvenience.
The defenses to this crime are rather straight-forward.  First, one may not have the specific intent to use the information for an unlawful purpose.  The apparent victim may have actually given consent or permission to the suspect to use his or her ATM card, for example.  Second, it may be that the police have simply arrested or contacted the wrong person, i.e. it is a case of mistaken identity or an alibi.
Identity theft under California Penal Code § 530.5 is a “wobbler,” meaning it can be charged as either a felony or a misdemeanor.  The decision to charge the crime one way or the other rests upon the defendant’s prior criminal history and the facts of the case.  For example, the person may have a lengthy history of other theft-related crimes and while the instant offense involved only $14.99 in fraudulent purchases, the case could be brought as a felony.  Similarly, the person may have no prior criminal history and may be 52 years old, but the offense involved great sophistication and the person was uncooperative, despite only $211 being at issue.  This could also be brought as a felony.
If the offense is charged as a misdemeanor, the maximum penalties include a year in county jail and a $1,000 fine.  If charges are brought as a felony under Penal Code § 530.5, the maximum time in custody, without any sentencing enhancements, is three years in state prison (to be served in county jail).  The maximum penalty is $10,000.  Restitution would also be recoverable by the victim and ordered by the judge.
It should be recognized that identity theft can also be prosecuted in federal court, where the penalties can increase to thirty years in custody under 18 U.S.C. § 1028 (The Identity Theft and Assumption Deterrence Act of 1998).