Home
Other Information
Criminal Defense Articles
I Was Convicted of a Felony – When & How Can I Vote?

I Was Convicted of a Felony – When & How Can I Vote?

Brief Synopsis: Only felons in custody and on parole cannot vote.  If one is a felon on probation, no matter what the conviction is for, he or she can vote. Voting rights are automatically restored once one is discharged from parole.  One must then re-register to vote.

Our office always finds it interesting when someone who never voted suddenly has a keen interest in voting after being convicted of a felony.  Perhaps it is the experience of seeing our laws being applied that awakens one’s interest in government and having a small “say” in who is elected.
In contrast, there are those who have always voted religiously who are convicted of a felony and feel pain at having their right to vote being taken away.
Quite often, those convicted of a felon simply misunderstand losing their right to vote.  Some think that they lose the right to vote for life.
Others think they need a governor’s pardon to be able to vote.  One client of ours asked me if we could file a certificate of rehabilitation for him so he could regain the right to vote.  Another client thought that restoring his right to vote depended on the type of felony one was convicted of.
Some of these “myths” are true in other states, but none are true in California.
In California, the truth is that only felons in custody (in either state prison or county jail under AB109) and on parole lose the right to vote.  Some characterize this loss of voting rights as having the right “suspended,” suggesting it is temporary in nature.  Indeed, voting rights are automatically restored once one completes parole (also called being “discharged from parole”). 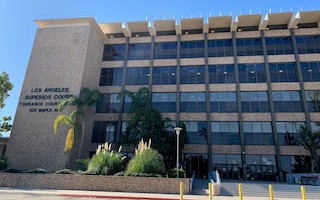 Torrance Courthouse
In contrast, felons on probation can vote.  A felon sentenced to a “joint suspended” sentence can vote because he or she is not in custody.
The individual only needs to register or re-register in order to vote (at registertovote.ca.gov, the local post office or DMV) before the next election, assuming he or she is also a U.S. citizen, a resident of California, will be age 18 by the date of the election and has not been found incompetent to vote by a court (i.e. the person is the subject of a conservatorship).
California is indeed rather “voter-friendly.”  One can even register to vote while in jail for a misdemeanor conviction.  One can register to vote while serving time in county jail for a felony, i.e. part of the terms of felony probation were that the defendant serve 90 days in county jail.  This was established on September 28, 2016, when Governor Brown signed Assembly Bill (AB) 2466, which permitted felons serving time in county jail to vote while in jail and to vote while on post-release monitoring, including mandatory supervision.  This law took effect on January 1, 2017.  Indeed, in California, one can register to vote while on county-supervised Post-Release Community Supervision (PRCS).
However, a person who is serving a state prison sentence in county jail (i.e. through AB109) cannot register to vote or vote while incarcerated, or if the person is in jail waiting to be transferred to state prison.
In mentioning these restrictions on voting, one should know that voting fraud, also known as election fraud, is firmly punished in California.  Registering to vote when one is not eligible, i.e. on is a felon on parole, is a misdemeanor under Elections Code 18100(a).  A violation of 18100(a) is a wobbler, so if charged as a misdemeanor, it carries a maximum exposure of one year in county jail.  If charged as a felony, one can face up to three years in state prison plus large monetary fines.
Voting if one is not eligible to vote is a felony (a violation of Elections Code § 18560(a)), punishable by up to three years in state prison and a fine of up to $10,000.
If one pretends to be someone else in order to vote on election day, this is a violation of Elections Code 18560(c).  This is a felony with up to three years exposure to state prison and fines up to $10,000.
Lastly, if a felon ineligible to vote does indeed vote using someone else’s mail-in ballot, this can be charged as a felony or a misdemeanor with a court fine up to $1,000 (with penalties and assessments added in, the total owed could be close to $4,000).
For more information about consequences of being a convicted felon, please click on the following articles:
Contact us.