Home
Other Information
Criminal Defense Articles
How Does the Forgery Exception to Prop 47 Apply?

How Does the Forgery Exception to Prop 47 Apply?

As the reader of this article may already be aware in general, Proposition 47 reduces the punishment and reclassifies six theft-related offenses and three drug possession offenses from felonies to misdemeanors.
Among the offenses it reclassified was forgery not exceeding $950 (Penal Code § 473(b)).  Proposition 47, however, included an exception at § 473(b) that the sentencing reduction is not applicable to any person who is convicted of both forgery and of identity theft as defined in Penal Code § 530.5.

Brief Synopsis: The California Supreme Court has ruled that the exception to Prop 47 relief (reduction of a felony to a misdemeanor) for forgery when identity theft is involved requires that the identity theft be committed to facilitate the forgery and visa versa; otherwise, forgery must be reduced to a misdemeanor as long as the amount in controversy is less than $950 and no other Prop 47 exception applies.

In People v. Gonzales (2018) 6 Cal.4th 44, the California Supreme Court held that the exception only applies when there is a “meaningful connection” between a defendant’s forgery conviction and his or her conviction for misuse of personal identifying information (§ 530.5).  The Supreme Court held that the mere fact that these two convictions were secured in the same proceeding did not demonstrate such a connection.
In the case of Raul Osuna Guerrero, he was arrested for violating a no-contact protective order after he refused to leave his daughter’s apartment.  When one of the arresting officers searched Guerrero, he found a wallet in Guerrero’s jacket and placed it in a plastic bag with his other personal belongings.
Guerrero was then booked into the Santa Clara County jail, where a corrections officer inventoried his possessions.  Inside Guerrero’s wallet, the officer found a driver’s license belonging to another person, a counterfeit $50 bill, a check from the St. Thomas Moore Society of Santa Clara County, and four personal checks neither owned by Guerrero nor made out to him. 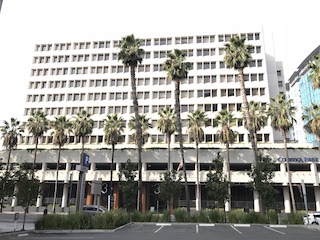 Court of Appeal Sixth Appellate District San Jose
Based on the items found in his wallet, he was charged with one misdemeanor count of possessing the personal identifying information of another (§ 530.5(c)(1)), one felony count of concealing or withholding stolen property (§ 496(a)), a misdemeanor count of contempt of court (§ 166(a)(4)), and one felony count of forgery by possession of a fictitious bill (§ 476).  The prosecutor also alleged that Guerrero had a prior conviction for a strike offense.
A jury then found all the allegations true and the judge found the prior strike allegation true.
After he was convicted, but before he was sentenced, the electorate passed Prop 47 into law.  The judge did reduce the receiving stolen property count (§ 496(a)) to a misdemeanor, but it did not reduce the felony forgery count under the forgery exception.  The judge then sentenced Guerrero to four years in state prison and to two-month terms on the remaining counts, to run concurrently (one-third of six months).
Guerrero appealed to the Sixth Appellate District, arguing that Prop 47 reduced his § 473(d) forgery conviction to a misdemeanor because the counterfeit $50 bill was less than $950, but the Sixth Appellate District rejected his on grounds that the forgery – identity theft exception to Prop 47 discussed above because he was concurrently convicted of identity theft.
The Gonzales decision, supra was then published and Guerrero appealed the Sixth Appellate District ruling to the California Supreme Court, which granted review and ordered the case remanded to the Sixth Appellate District to vacate its decision and reconsider Guerrero’s appeal in light of Gonzales.
On reconsideration, the Sixth Appellate District affirmed Guerrero’s forgery sentence, holding that there was a meaningful connection between Guerrero’s forgery and identity theft convictions because he “contemporaneously possessed another person’s personal identifying information and a fictitious $50 bill.”
Guerrero again appealed to the California Supreme Court.  It reversed the Sixth Appellate District, finding that to deny relief to Guerrero, the Sixth Appellate District had to find that the People proved the forgery offense facilitated the identity theft offense, or visa versa.  Here, that was not done, so the exception to Prop 47 relief would not apply.  Accordingly, the Supreme Court remanded the case with instructions to reduce Guerrero’s conviction to a misdemeanor.
We offer this summary because it is rare that one sees the forgery and identity theft exception even argued, but if one does, this case clarifies how the exception actually applies.
The citation for the California Supreme Court ruling discussed above is People v. Raul Osuna Guerrero (2020) 9 Cal. 5th 244, 261 Cal. Rptr. 3d 776, 462 P. 3d 514.
For more information about Prop 47 and forgery, please click on the following articles:
Contact us.
Serving Torrance, Long Beach, Compton, Airport Courthouses and Other Courthouses.