Our client, age 27, had thus far in life enjoyed a successful career in the financial services industry.  He was out socializing with friends in Hermosa Beach one weekend evening until the bars closed at 2:00 a.m.

In a Nutshell:  Client caught urinating in public near Scotty’s in Hermosa Beach, misdemeanor charge dismissed and client pleads to infraction for disturbing the peace; $150 fine, plus penalties and assessments.

The night was cold and raining.  As he stepped outside into the cold air and began his walk to his car near Scotty’s on the Strand, he felt the urge to pee before his roughly twenty-minute drive home.  He could see police officers dealing with a car full of young females near Scotty’s, so he walked past his car to a place near a bush that he thought police would be unable to see him. 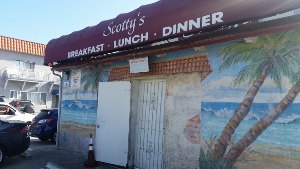 Scotty's on the Hermosa Beach Strand
Apparently, our client’s expectations were a little too optimistic.  As he returned to his car after urinating, a police officer casually approached him and told him that he had seen everything that just happened and needed to give our client a ticket.

Our client was devastated.  He thought for a moment about asking the officer to prove he actually urinated, as the ground was wet from rain, so seeing a wet spot on the ground would be impossible.  He also thought to challenge the officer about his visual observation because the officer was at least 100 feet away and really may have been concentrating on the drunken girls.

However, the client decided not to contest the ticket or what the officer claimed.  The officer then handed our client a ticket for misdemeanor public nuisance, a violation of Penal Code § 372.  The officer asked our client to sign a promise to appear in the Torrance Superior Court in a few weeks and our client signed the ticket.

The client was most worried about losing his job over this charge.  He called Greg Hill & Associates and discussed the matter in detail.  Greg answered his questions and recommended, based on his experience, that the client attend 30 Alcoholics Anonymous (AA) meetings prior to the first court appearance, which was two weeks away.  Greg explained where to go and how the meetings were conducted.  The client promised to do his best.

The client was not able to do all 30 meeting by the first appearance in court, the arraignment.  He did, however, attend 11 such meetings, which was a very good start.  Greg, however, spoke to the Redondo Beach City Prosecutor, now handling cases for Hermosa Beach, and negotiated a plea bargain that if the client were to show proof of attending 30 AA meetings by the next court appearance, or 19 more such meetings, she would agree to amend the complaint to allege a Count 2 for an infraction for disturbing the peace (Penal Code § 415(2) – playing loud music).

Greg then set the second court appearance six weeks later to give the client plenty of time to attend 19 more meetings.

The client followed through with the 19 more meetings, which was great.  At the second court appearance, a continuance of the arraignment, Greg showed the Redondo Beach City Prosecutor the proof of our client’s attendance at the 30 meetings.  She then agreed to amend the complaint to allege the infraction of violating Penal Code § 415(2) and to dismiss the misdemeanor charge.

Greg then entered a no contest plea for the client to the infraction and the judge sentenced the client to pay a fine of $150, plus penalties and assessments, which totaled $720.  The client was happy to avoid the misdemeanor on his record, as well as being on informal, or summary probation because every misdemeanor sentence must include probation unless the defendant opts to serve the entire sentence in jail.  An infraction, in contrast, involved no probation.